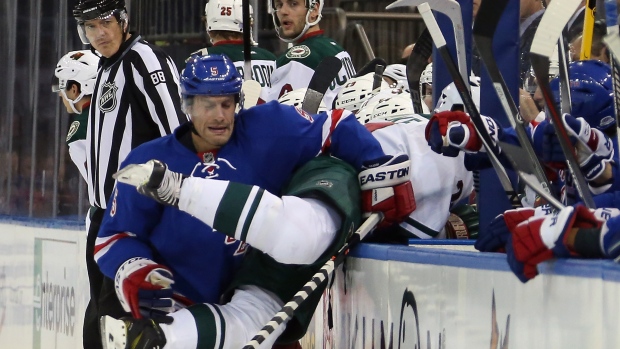 GREENBURGH, N.Y. - New York Rangers defenceman Dan Girardi practiced Friday and is expected to play in Game 2 of the playoff series with Pittsburgh on Saturday night.

Girardi took a puck in the face in the third period of New York's 2-1 win in Game 1 on Thursday night. He immediately went to the dressing room and did not return. He was treated by a dentist after leaving the game.

A shot by Pittsburgh's Chris Kunitz deflected directly under Girardi's shield into his face. He was dazed, then skated off. But he said Friday he has been cleared to return and there were no injuries.

Girardi played in all 82 regular-season games for the fifth time in his career. Only Hall of Famer Brian Leetch has managed that feat for the Rangers. Since joining the Rangers in 2007, Girardi leads all NHL players with 741 games played.