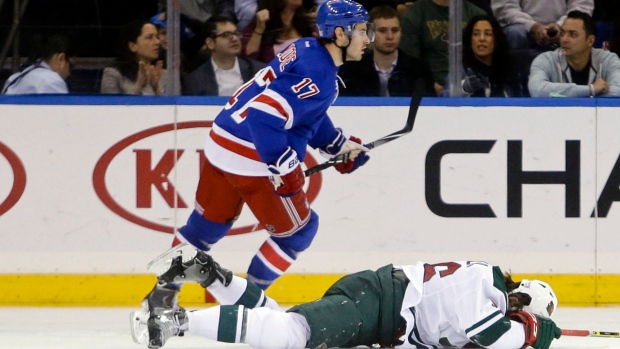 The decision was handed out by the league's Department of Player Safety following an in-person hearing with Moore, who is considered a repeat offender.

Moore was assessed a match penalty 7:12 into the second period of Monday night's game when he delivered a shoulder to Haula's head in the New York zone after Haula shot the puck.

Moore will begin serving the suspension Saturday when the Rangers host the Winnipeg Jets, and he will be eligible to return on Nov. 11 at home against Pittsburgh.

He was also suspended for two games in last season's Eastern Conference finals when he landed a similar hit to the head of Montreal forward Dale Weise in Game 5.

Under terms of the collective bargaining agreement, Moore will lose US$51,859.75 in salary that will go to the Players' Emergency Assistance Fund.

In a video explaining the suspension, the league said the nature of the hit, Haula's resulting injury, and Moore's repeat offender status were key factors in determining the punishment.

"Just after Haula releases the puck, Moore drives into him forcefully with his left shoulder," the video narrator said. "While initial contact is made with Haula's shoulder, the main point of contact is Haula's head."

The league pointed out that Haula was eligible to be checked, and Moore's hit wasn't late. Moore also didn't hit with his elbow as he landed the hit, but it was still illegal.

"If Moore is to attempt this extremely difficult hit, his timing and angle of approach must ensure that he hits squarely through the body and that Haula's head is not the main point of contact. Moore does neither," the video stated. "Haula's head absorbs the brunt of Moore's shoulder, and the way Haula spins to the ice is a clear indication that this hit was not square through the body."

Moore was the second Rangers player ejected from Monday night's 5-4 win. Earlier in the game, forward Chris Kreider was kicked out after he received a major penalty for boarding defenceman Jonas Brodin in the first period.

New York killed off both five-minute power plays that resulted from Kreider's and Moore's hits.

Kreider didn't receive any supplemental discipline from the NHL.

Michael Kostka is expected to replace Moore in the lineup beginning on Saturday. He hasn't played since he committed two turnovers that led to goals in a loss to the New York Islanders on Oct. 14.

That is the only game Kostka has played in this season.