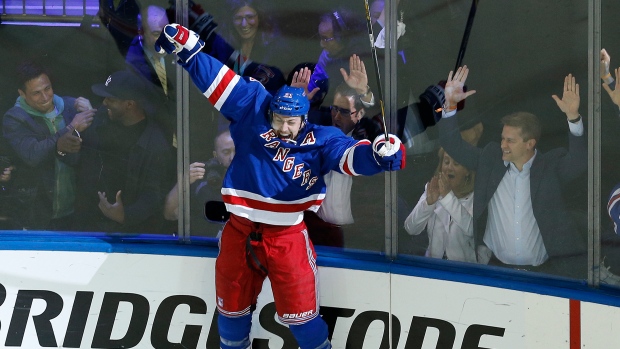 NEW YORK, N.Y. - Make the resilient Rangers play a Game 7 and they don't even flinch.

Dump them into a 3-1 hole in a playoff series and they simply work harder.

Derek Stepan scored 11:24 in overtime, lifting New York past the Washington Capitals 2-1 and into the Eastern Conference final Wednesday night.

"We have a good group that keeps their wits about them and keeps calm," said Stepan, who was mobbed by his teammates along the glass as Madison Square Garden shook from the cheers. "There is no real panic. We just go out and play. We just see what happens and we just play hockey."

Stepan's wrist shot from the left wing after he won a faceoff — a rarity for the Rangers — capped the comeback. The Rangers are the only team to win series after trailing 3-1 in successive years, doing the same thing to Pittsburgh in the second round in 2014.

New York, which had the NHL's best record this season, will face Tampa Bay for a spot in the Stanley Cup finals, where the Rangers lost to Los Angeles last spring. The series begins Saturday at the Garden.

Alex Ovechkin scored in the first period for Washington, which has lost five Game 7s in as many tries when leading a series 3-1. Kevin Hayes tied it in the second.

Although the Rangers were badly outplayed early in overtime, Lundqvist stood tall with eight saves as the Capitals couldn't find that winning touch. That's something the Rangers seem to own in a seventh game: New York has won six in a row, including the last three series against Washington.

"It's hard to really explain," said Dan Girardi, whose shot from the point led to Stepan's winner. "We were down and it looked like we were down and out, and we found a way to crawl back in this series and win one game at a time. We knew coming into this barn in Game 7 anything could happen and it went down to the wire."

It was the Rangers' fourth overtime win in as many tries this year, all by 2-1 scores. It was a cruel finish for Braden Holtby, who was superb all series and made 37 saves Wednesday night.

"Great series. It was fun to be a part of, obviously not fun to be on the losing side," Holtby said. "We left it all out there. I don't think there was one guy who wasn't committed. That's life sometimes."

Perhaps a welcome harbinger for the Rangers: The last time they won a Game 7 in overtime was 1994, when they beat the Devils and, one round later, hoisted their most recent Stanley Cup.

Washington was quicker to the puck than the generally faster Rangers in the first period, when Lundqvist was much busier than Holtby, making 14 saves. The difference through 20 minutes: Washington's top goal scorer connected on his best chance, New York's didn't.

Ovechkin, who scored 53 times to lead the league, somehow got wide open in the slot after the Capitals won a faceoff and worked the puck off the boards. His wrist shot beat Lundqvist to the glove side.

Late in the period, while killing a penalty, the Rangers' Rick Nash, who trailed Ovechkin by 11 goals during the season, got free on a breakaway. He tried to deke Holtby and go through the legs, but his backhander was stopped as the fans lamented a missed opportunity.

The Rangers' sometimes-anemic, sometimes-opportunistic power play tied it in the second period. Tireless defenceman Ryan McDonagh, who played 29 minutes kept in a clearing attempt at the right point and passed to J.T. Miller. His cross-ice feed to a cutting Hayes was perfect and Hayes put it past Holtby.

That sparked the Rangers for a while, but by the end of the period, the Capitals were buzzing the net. No one could score, and into the third period they went.

And then into overtime after a spotty, nervous third session.

Ovechkin was on the bench when Stepan ended it, and he simply stared at the ice, shook his head, then got in line for the traditional handshakes.

Lundqvist and Holtby, sensational throughout, embraced warmly, recognizing what each went through in the series.

"You don't want to overthink anything," Lundqvist said. "You have to believe in the group and how we play and that someone in this room is going to be the hero."

That would be Stepan.

NOTES: New York lost D Dan Boyle in the second period after he was hit in the head by Brooks Orpik's elbow. ... Hayes is the first Rangers rookie to score in a Game 7 since Muzz Patrick in 1939. ... The Rangers extended an NHL record with their 14th straight one-goal game, dating to last year's Stanley Cup finals loss to Los Angeles. ... The Capitals did not score a power-play goal in the final five games. ... Tampa Bay swept three games from New York this season.