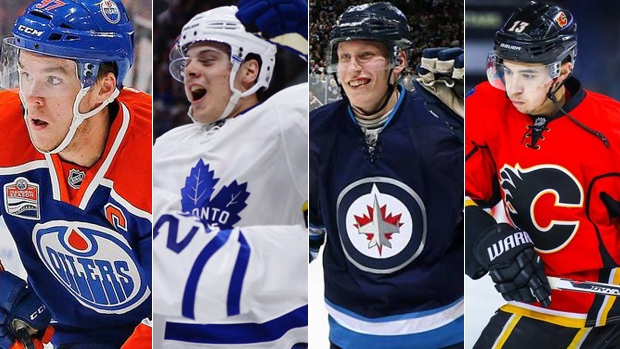 Canada’s Core Four are the heartbeat of the new NHL.

With a consensus developed from feedback from more than a dozen NHL front offices, TSN Hockey ranked each team’s top four core players under the age of 24 as of Oct. 1, 2016.

Four Canadian clubs populate the top of the chart, a worthy consolation prize just one season after Canada was shutout of the Stanley Cup playoffs for the first time since 1970.

Here is the full list, with each team’s players ranked in order of perceived strength:

Scoop: No player on the board holds a candle to McDavid, making the Oilers a clear winner. Perhaps Edmonton’s strength is also exhibited in the eligible players who didn’t make the cut: Darnell Nurse, Adam Larsson and Ryan Nugent-Hopkins.

Scoop: The Maple Leafs may be the only team on the board with two true ‘Grade A’ prospects in Matthews and Marner, while Rielly is playing himself closer to the conversation of one of the NHL’s true No. 1 blueliners.

Scoop: Scouts were split on whether Winnipeg should be ahead of Toronto, but they are splitting hairs. Scheifele can drive production from the middle as well as anyone on this list short of McDavid. He can also dish the puck to Laine, already one of the NHL’s purest goal scorers.

Scoop: Gaudreau and Monahan have been two of the most consistent producers across the NHL, combining for 141 points last year - the most of any duo on this board. Sam Bennett, who didn’t make the list, helped provide the tiebreaker over Tampa Bay.

THE BEST OF THE REST

Scoop: Kucherov has picked up the slack in Steven Stamkos’ absences, providing clutch goals for Tampa Bay. The Lightning are one of five teams with a goaltender talented enough to make the list; Vasilevskiy is strong enough to make trading established No. 1 Ben Bishop for expansion considerations feel like a fait accompli.

Scoop: The magic of Jaromir Jagr is rubbing off on Barkov and Huberdeau, who posted identical 59-point seasons last year.

Scoop: Werenski, 19, is tracking toward a Calder Trophy finalist in a year teeming with talented rookies, while first-rounder Wennberg has also enjoyed his coming-out party.

Scoop: Eichel, 20, picked up right where he left off after missing the first 22 games of the season. He is on pace to finish with 60 points, with more help on the way next year from Nylander.

Scoop: Add Larsson, 19, to the Ducks’ stacked list of young blueliners that includes Cam Fowler (too old for this exercise), Lindholm, Shea Theodore and Brandon Montour.

Scoop: Provorov, 19, has emerged as Philadelphia’s No. 1 defenceman already, logging north of 22 minutes a night during their recent 10-game winning streak.

Scoop: Rask, 23, is one of the young centres in the league who doesn’t get nearly enough attention. He’s taking a big step forward this year with 18 of his 25 points in 31 games coming at even strength.

Scoop: The Canadiens are banking Sergachev can make as much of an impact on their next year as a 19-year-old as Zach Werenski and Ivan Provorov have this season in Columbus and Philadelphia.

Scoop: Pastrnak, 20, is tied with Laine for second in the NHL in goals with 19, despite playing in eight fewer games. And without much fanfare, Carlo — also 20 — has jumped right in from the WHL to rip off 22 minutes a night.

Scoop: The Coyotes don’t have nearly enough on-ice support to help Domi, 21, and rookies Dvorak and Chychrun through NHL growing pains, making it wise to send Strome back to the OHL.

Scoop: A stellar 22-year-old Stanley Cup-winning backstop is quite the prize. But the two players at the bottom of Pittsburgh’s depth chart are far from sure bets.

Scoop: The Avs’ young core with MacKinnon is under fire of late, but reinforcements could be soon on the way, with North Dakota’s Jost looking like one of the best prospects outside the NHL right now.

Scoop: Brodin and Dumba are already big pieces for the Wild. Eriksson-Ek could step right into the lineup next season in an equally impactful role up front.

Scoop: Fabbri, who turns 21 next month, is trending toward a 35 per cent uptick from last year’s 37 points he posted as a rookie. That will make outgoing coach Ken Hitchcock happy.

Scoop: The case could be made that Arvidsson, 23, has been the Preds’ best player this season. He is tied for the team lead in scoring with Ryan Johansen, who aged out of this experiment.

Scoop: So much of the Canucks’ future plans are riding on the development of Juolevi, picked fifth overall last June, as they try and rebuild from the backend. He was first defenceman taken by Vancouver in the first round since 2005.

Scoop: Larkin can score. Athanasiou can fly. Mantha is trying to put it all together. The Red Wings’ core is not devoid of talent, but lacks consistency and depth.

Scoop: Three of Ottawa’s core four players aren’t on the NHL roster, which bodes well for a Sens team already nipping and clawing at a playoff spot. Chabot will get all the minutes he can handle in a top-pairing role for Team Canada at the World Junior Championship.

Scoop: Burakovsky, 21, has taken a step back this season, sitting as a healthy scratch for Barry Trotz while his production numbers have sagged.

Scoop: Two seasons ago, Strome was a 50-point player as a 21-year-old. This year, he has been a healthy scratch under Jack Capuano, fitting the Islanders’ overall one-step-forward, two-steps-back theme.

Scoop: Meier, the ninth overall pick in 2015, scored in his NHL debut in Montreal at the Bell Centre, the kind indelible experience that also leaves a mark on team brass and fans.

Scoop: The Devils bet last summer that Severson, 22, could help pick up the slack for Adam Larsson’s departure. Looks like a good bet now, with Severson already closing in on a new career-high in points (22) through just one-third of the season.

Scoop: DeBrincat somehow didn’t show Team USA enough to crack their World Junior roster, perpetuating the anti-CHL narrative since he has a staggering 30 goals in 28 games for the OHL’s Erie Otters this season.

Scoop: The Stars’ two Finnish defencemen, Lindell and Honka, have a lot of work to do before they can be considered as two true potential difference makers on the backend.

Scoop: The Kings are the only team devoid of a true core player currently at the NHL level - no player on their roster meets the age criteria of this exercise. Maybe that shouldn’t be a surprise, though, as the Kings’ average first pick position has been 40th overall since 2011 because they’ve traded picks to gun for a third Stanley Cup.