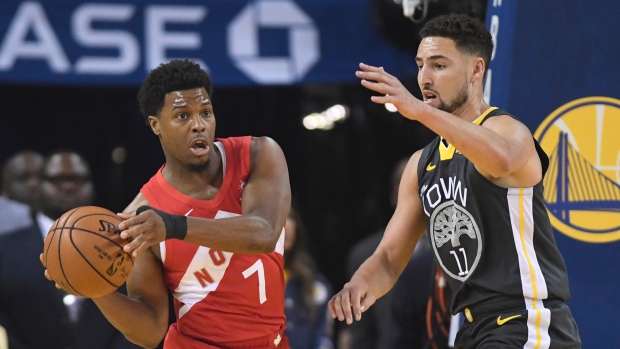 With the National Basketball Association on hold for the foreseeable future, TSN and Sportsnet are airing the entirety of the Toronto Raptors’ playoff run to the 2019 NBA title. You can watch Game 1 of the NBA Finals Tuesday night on Sportsnet at 8pm ET/5pm PT.

For the first time in franchise history, the Toronto Raptors advanced to the NBA Finals.

Punctuated by a thunderous Kawhi Leonard slam dunk after a hand-off from Kyle Lowry that will be remembered by Raptors fans alongside ‘The Shot’ from a series ago, the Raptors defeated the Milwaukee Bucks 100-94 to capture the Eastern Conference Finals 4-2.

Leonard finished with 27 points and 17 rebounds, while Lowry, who continued to play through his sprained thumb, added 17 points and eight assists to lead the Raptors to the series-clinching win.

“If you know the history of the team, you know this is a big moment,” Pascal Siakam echoed after the game.

The win was a success story 24 years in the making for the Raptors franchise, and a big weight off the team’s shoulders. You could see it in head coach Nick Nurse’s face when rapper Drake gave him his second shoulder massage of the series, this one in celebration because the Raps earned the right to play for the NBA Championship.

But lying in wait were the Golden State Warriors. The well-rested Western Conference champions who defeated the Portland Trail Blazers 4-0 in the Conference Finals. The winners of the last two and three of the last four NBA Finals. And the betting favourites (-280) to make it three in a row.

For what it’s worth, the Raptors won both regular season contests against the Warriors last season.

And while making the NBA Finals was a momentous occasion for the Raptors, the team wasn’t satisfied with just the title of Eastern Conference Champions.

"Obviously, it's a great accomplishment, and we're happy to be taking that next step, but you want to win a championship, and you want to win the whole thing," VanVleet said before Game 1. "It's not about just making it to the Finals. We're not satisfied. We're not happy to be here. We're really hungry, and we want to go out here and have a chance to win it, and we've earned it, and we deserve it."

The NBA Finals were unchartered territory for the Raptors, but one that the team, fans, and city of Toronto was excited to experience.