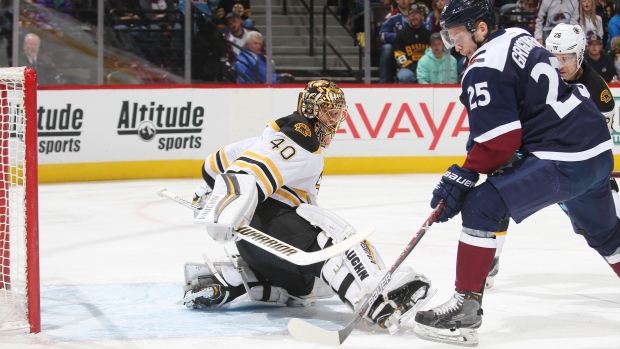 DENVER — While his counterpart was kept under constant duress, Bruins goaltender Tuukka Rask had a relatively breezy night.

Very few defensive breakdowns, hardly any penalties and a puck-controlling offence will do that.

Rask stopped 21 shots and David Krejci scored in the first period, lifting Boston over the Colorado Avalanche 2-0 on Sunday night.

The difficult-to-solve Rask showed no signs of fatigue despite being in net for a second straight night. He made 31 saves in a 2-1 win over Arizona on Saturday. Rask got his 33rd career shutout and moved to 7-0 on the road this season.

"That's how you win a road game — a pretty much mistake-free game," Rask said. "We kept them on the outside and really limited their scoring chances and rushes. And then we kept the puck in the offensive zone and made some plays and created chances."

Krejci scored his second goal of the season on a wrist shot midway through the first period — a big development for a team fighting some exhaustion.

"We didn't have to overwork," said Rask, whose 10 wins this season are tied with Montreal goaltender Carey Price for the league lead.

The Avalanche pulled Semyon Varlamov with about a minute remaining but couldn't generate much offence. Dominic Moore sealed it with an empty-net goal with 27.2 seconds remaining.

Varlamov turned out to be the hard-luck loser, stopping a season-high 43 shots.

"Varly was outstanding," Avalanche coach Jared Bednar said. "He was the best player on the ice."

An already struggling Avalanche offence was missing leading scorer Matt Duchene, who's dealing with concussion-like symptoms stemming from a hit against Winnipeg on Friday. It was the fourth time Colorado has been shut out this season.

"Passed up on a lot of shots early in the game, too much east-west plays, and then we didn't get a lot of our point shots through, a lot of them got blocked," Bednar said. "It's kind of Boston's M.O., they do a good job in that regard, but we certainly made it too easy for (Rask)."

Boston didn't commit a penalty until midway through the third period, when rookie defenceman Brandon Carlo was called for holding. Recent call-up A.J. Greer tried to wrap in a shot and then slid into the net with Rask. The officials took a quick look at the play on video to see if the puck crossed the line.

Carlo then had a breakaway out of the penalty box, only to be thwarted by Varlamov.

"It's frustrating that we didn't win," Varlamov said. "It doesn't matter how you play. I'm not happy that we lost because we need the two points. That's the most important thing for us."

Boston dominated the second period, outshooting the Avalanche by a 23-7 margin. The only thing keeping this from a blowout was Varlamov. Case in point: a sequence late in the period when Brad Marchand lined a shot that bounced off Varlamov's left pad and back to Marchand. The Bruins left winger quickly lined another shot that Varlamov, who caught it with his glove.

Krejci got the best of Varlamov at 9:30 of the opening period off a pass from David Backes. That was all Rask needed.

"Just another great game. Can't say enough about that guy," Krejci said. "He's been great so far and keeping us in the game every single game. Sometimes, we only need one or two goals to win the game."

NOTES: Boston is five goals shy of scoring the 20,000th goal in franchise history, according to the team. The Bruins will join Montreal as the only teams in NHL history to reach that milestone. ... Carlo is from Colorado Springs and grew up a big Avalanche fan. ... Avalanche LW Blake Comeau missed a fourth straight game with a groin injury. ... Greer played in his first NHL game after being recalled from San Antonio of the American Hockey League.

Bruins: At Minnesota on Thursday night to finish a three-game trip.

Avalanche: Host Los Angeles on Tuesday night to wrap up a four-game homestand.