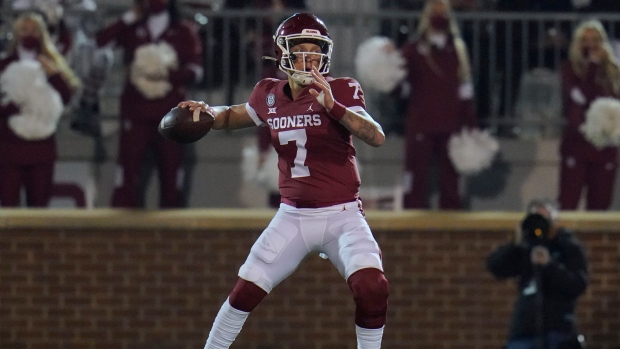 NORMAN, Okla. -- Spencer Rattler passed for 301 yards and four touchdowns and ran for another score to help No. 18 Oklahoma beat No. 14 Oklahoma State 41-13 on Saturday night to boost its hopes of winning a sixth straight Big 12 championship.

Rhamondre Stevenson ran for a career-high 141 yards, and Theo Wease caught two touchdown passes for the Sooners in their straight victory. Oklahoma (6-2, 5-2) won its sixth straight in the series and extended its November winning streak to 23 dating to 2014.

Oklahoma State running back Chuba Hubbard was held to 44 yards on eight carries, and the Cowboys (5-2, 4-2) gained just 246 total yards.

Iowa State leads the Big 12 with just one conference loss, and Oklahoma State joined Oklahoma and Texas with two league losses in the race to qualify for the Big 12 Championship Game.

Oklahoma raced to a 21-0 lead in the first nine minutes on the strength of three touchdowns by Rattler -- two passing and one rushing. The Sooners led 21-7 at the end of the first quarter. It was the most points Oklahoma has scored in a first quarter against Oklahoma State in Norman.

Oklahoma State quarterback Spencer Sanders left the game in the first quarter after Oklahoma defensive end Ronnie Perkins slammed him to the ground. Shane Illingworth replaced him and threw a touchdown pass to help cut Oklahoma's lead to 27-13 at halftime, but he struggled from there before being replaced by Sanders in the fourth quarter.

Oklahoma State: The Cowboys have issues at quarterback. They took Sanders out after the hard tackle by Perkins, then Illingworth completed just 5 of 21 passes before Sanders returned to the game in the fourth quarter.

Oklahoma: The Sooners' offence has averaged 55 points in three games since Stevenson returned from a suspension. He has brought balance to an offence that relied too much on Rattler early in the season. The defence has improved too, allowing just 16 points per contest in its last four games.

Oklahoma: At West Virginia on Saturday.