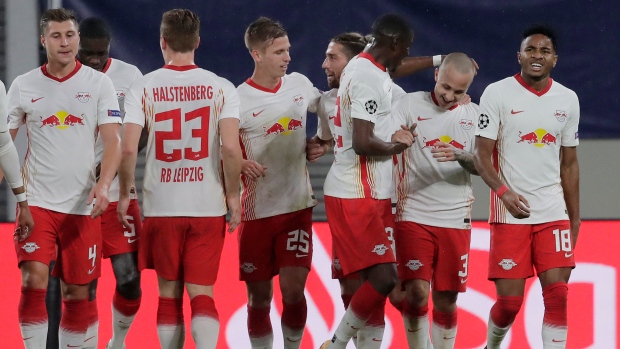 Angelino says never earning manager Pep Guardiola's trust at Manchester City completely eroded his confidence, something he only gained back in moving to RB Leipzig.

The 24-year-old left-back signed for City in 2012 and found himself on loan for virtually the entirety of his City career, including at New York City FC and Girona. After moving to PSV Eindhoven in 2018, City triggered a buyback clause and brought the Spaniard back to the Etihad where he found first team action under Guardiola hard to come by.

"I had a rest when I was with Pep for six months, that was enough," Angelino said. "I don't want it again. That's why I want to be on the pitch. I don't like being out. I am thankful that I get to play most of the time. I had enough holidays."

Angelino first joined the Bundesliga side on loan last season before making the transfer permanent last week on a four-year deal.

He says there are similarities between Guardiola and Leipzig manager Julian Nagelsmann, but there is also one major difference.

"They both like to play with the ball, get the ball quick, there is one thing that is a big difference - one gave me the confidence and played me and the other didn't," Angelino said. "So I am thankful to Julian for the trust and sometimes you need, I don't want to use a bad word, you need courage to put a player and he did from the first game."

With his City career ending after only 12 total matches, Angelino says he never got the opportunity to prove his worth.

"It killed me," he said. "The confidence was everything, when you don't have the trust of a coach it is everything. I was judged for preseason, two games, and then I didn't get my chance until a few months. It is hard to play one game every two months so I am just happy that happened so I could come here and meet Julian and everyone here."

Still, the former Spain U-21 doesn't consider his City tenure to have been a complete disaster.

"It was a 50/50 experience," Angelino said. "On one side I really learned a lot from Pep, he improved me as a player on the pitch and I have to be thankful also for the experience. On the other side I didn't play as much as I wanted to or I deserved."

In 29 appearances across all competitions this season, Angelino has nine goals. Leipzig currently sits second in the Bundesliga table, two points back of leaders Bayern Munich. The club returns to action on Saturday when they host eighth-place Borussia Monchengladbach.