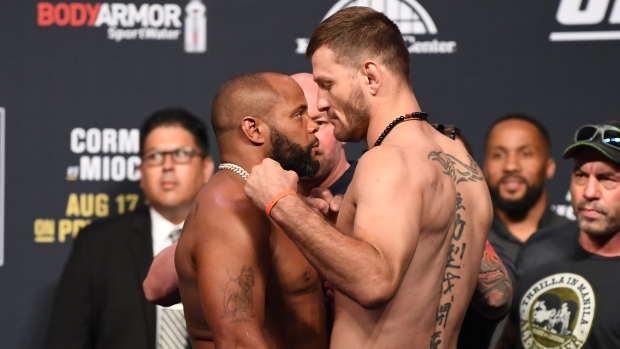 UFC 252 takes place this Saturday and is headlined by a fight that many believe will determine the greatest heavyweight in mixed martial arts history when champion Stipe Miocic faces Daniel Cormier for the third time in three years with both fighters each having won one of the matchups.

Nearly dead even for the trilogy

Despite Miocic having won their most recent bout, Cormier is a small favourite in the trilogy fight.

Heading into the fourth and deciding round of their previous fight, Cormier was up (30-27, 29-28, 29-28) on the scorecards and with him having won their first bout in the first round, signs point to Cormier having a good deal more success than his adversary in terms of overall time in the cage.

Cormier has also out-landed Miocic 206-147 in significant strikes in their combined two fights.

While anything can happen in a heavyweight bout, especially one between two of the highest-level fighters that the division has ever seen, Cormier’s status as a small favourite is likely being cemented by his overall performance against Miocic, despite the recent loss.

Rozenstruik is back just three months after suffering his first career loss, also at the (very powerful) hands of Ngannou.

This bout comes down to known versus unknown. The former champion dos Santos is a known commodity in mixed martial arts and it’s pretty clear where he stands at this point in time. He is not the "Cigano" of old – rather the old Cigano – but he is still a step ahead of most top heavyweights, even in the latter years of his career.

Rozenstruik is still somewhat of an unknown commodity. He came into the UFC with four straight knockouts, with the last one coming against Alistair Overeem.

However, Overeem was the technically superior fighter for all but the final seconds of the fight, where Rozenstruik scored a knockout with just four seconds remaining.

The performance against Overeem clouds the water in terms of determining just how good Rozenstruik is and how he will fare against a polished veteran like dos Santos, who was on an impressive three-fight win streak following the loss to Ngannou.

Bantamweight prospects try to level up

O’Malley and Dvalishvili have both looked like potential top-5 bantamweights in their recent performances.

O’Malley has the potential to become a major star, while Dvalishvili has earned his nickname "The Machine" with 24 takedowns in his previous four bouts.

These two prospects are getting a lot of love at the betting window based on their upside.

Both have already had two impressive wins in 2020 and they look to continue their upward trajectory, but in order to do so, they have to face their toughest competition yet.

Vera would have been riding a six-fight win streak if not for a controversial unanimous decision loss to Song Yadong in May and Dodson is coming off a win where he derailed the bantamweight hype train of Nathaniel Wood.

Both have the capacity to play spoiler against these two up and comers, so proceed with caution before buying into the hype. How these two bouts play out will say a lot about just how good these two prospects could become.

Sean O’Malley has never been the underdog in a fight

Felice Herrig has only been a +200 or higher underdog once, a win over Alexa Grasso

Ashley Yoder has been an underdog in four of her six UFC bouts and she is 0-4 in them.