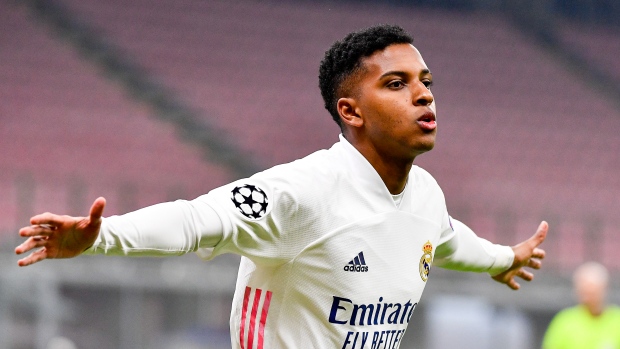 MILAN — Real Madrid produced its most complete performance yet in this season’s Champions League to beat 10-man Inter Milan 2-0 on Wednesday.

Eden Hazard converted a penalty early in the first half and Rodrygo’s header deflected in off Inter defender Achraf Hakimi in the 59th minute as Madrid remained one point behind Group B leader Borussia Mönchengladbach, which eased to a 4-0 win over Shakhtar Donetsk.

The only other win for 13-time champion Madrid was a 3-2 victory over Inter in Spain three weeks ago, after it opened with a stunning home loss to Shakhtar.

Gladbach leads the group with eight points, Madrid has seven, Shakhtar has four and Inter two.

Before kickoff, the teams lined the centre circle for a minute of silence in honour of soccer great Diego Maradona, who died Wednesday at 60. The San Siro was empty of fans due to the coronavirus.

Nicolò Barella was penalized for running into Nacho to set up Hazard’s penalty.

Madrid midfielder Lucas Vázquez then hit the post and Inter midfielder Arturo Vidal picked up his second yellow card after barely more than a half hour — apparently for protests.

Substitute Vázquez also provided the cross for Rodrygo’s header near the hour mark.