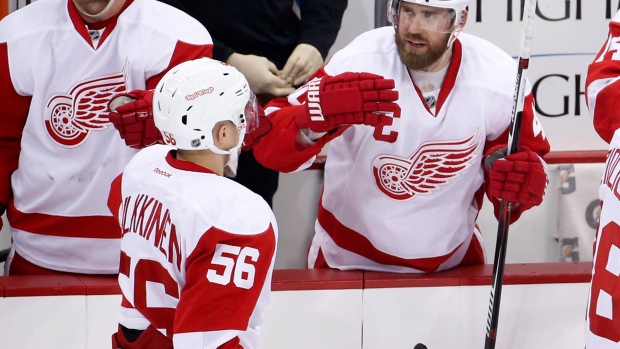 PITTSBURGH, Pa. - A mid-March malaise threatening to become something far more ominous, the Detroit Red Wings figured it was time to clear the air before facing Pittsburgh on Sunday.

The Red Wings wouldn't call the players-only meeting a big deal, just a necessary one.

"We just said 'Enough is enough,'" forward Henrik Zetterberg said. "We've got to go out and play, got to enjoy playing first of all. It was almost like everyone was a little afraid out there and not embracing it. Today it was a lot better."

Zetterberg had a goal and an assist, Teemu Pulkkinen scored twice for the first multigoal game of his career and the Red Wings had little trouble in a 5-1 win.

Barely 24 hours removed from a 7-2 whipping in Philadelphia, the Red Wings righted themselves on the other side of Pennsylvania. Marek Zidlicky added a goal and two assists and Riley Sheahan also scored for Detroit. Petr Mrazek made 42 saves for his first win in over a month.

"We needed this one," Pulkkinen said. "We were talking after the game yesterday that we can't play like that."

Marc-Andre Fleury stopped just 12 of the 16 shots before being pulled in the second period as the Penguins lost their second straight. David Perron scored his 17th of the season for Pittsburgh. Sidney Crosby picked up an assist after missing Saturday's loss to Boston due to an illness, but the Penguins mustered little flow without centre Evgeni Malkin, who is out indefinitely with a lower body injury.

"We've just got to regroup here and understand basically our playoffs start right now," Crosby said. "You have to enter playing the right way. You have to do things right and have that mentality for the rest of the year."

It's a mentality that had gotten away from the Red Wings of late. Detroit came in 1-4 in its last five games and was barely competitive against the Flyers. They regrouped by jumping on the Penguins early then letting Pittsburgh implode. The Penguins drew 64 penalty minutes, including a handful of 10-minute misconducts.

"Certainly I thought our guys got on edge way too quick in the game," Pittsburgh coach Mike Johnston said. "Penalties and 10-minute misconducts killed us tonight. It kept us from getting back into the game."

Sheahan gave Detroit the lead 1:21 in by deflecting a Zidlicky slap shot from the point by a well-screened Fleury. Pulkkinen made it 2-0 late in the first period when he buried a one-timer from the left circle over the goaltender's right shoulder at the end of a dominant shift in which Pittsburgh couldn't seem to get out of its own way.

Pittsburgh's frustration quickly bubbled over. Chris Kunitz drew a roughing call with 52 seconds left in the first, and the veteran forward added a 10-minute misconduct and an unsportsmanlike minor for squabbling with officials at the end of the period. The NHL's top power play used the ensuing 5-on-3 to push Detroit's advantage to 3-0 just 39 seconds into the second on Zidlicky's slap shot.

The Penguins never recovered. At one point there were more Pittsburgh players in the penalty box than on the ice. When Zetterberg tapped in a pretty pass from Gustav Nyquist — who stepped in front of a Pittsburgh clearing attempt and zig-zagged his way to the front of the net — the Red Wings were up 4-0, Fleury's day was over and Detroit's nightmarish afternoon in Philadelphia the day before was a distant memory.

Mrazek's steady play made sure the massive advantage stood up. Officials waved off a power-play goal by Pittsburgh's Christian Ehrhoff midway through the second because of interference and the Penguins never threatened to make it interesting.

Pulkkinen's second goal epitomized his day — and Pittsburgh's, too. The 23-year-old broke his stick sending a shot toward backup goaltender Thomas Greiss only to see it deflect off two Penguins and skitter into the net.

NOTES: Fleury fell to 12-2-2 against the Atlantic Division this season. ... Penguins F Steve Downie received two 10-minute misconducts as well as a minor for cross checking to boost his season penalty minute total to 221, tops in the NHL. ... The Red Wings went 1 for 4 with the power play. The Penguins were 0 for 4. ... Pittsburgh F Patric Hornqvist left with an injury in the third period and did not return.