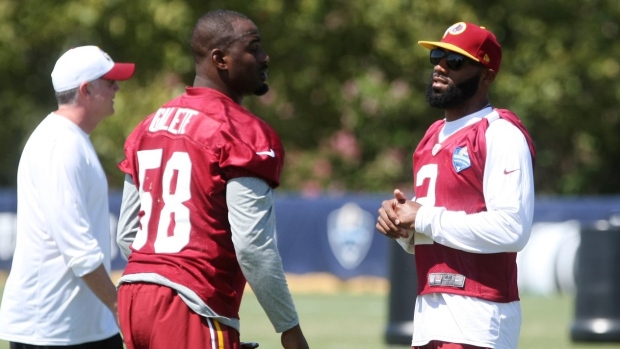 RICHMOND, Va. - General manager Scot McCloughan says a "thorough, thorough, thorough" vetting of Junior Galette left the Washington Redskins "very comfortable bringing him on board," despite off-field problems that led the New Orleans Saints to cut the outside linebacker.

"He has to walk the line, and he knows that," McCloughan said Sunday. "If he doesn't, then he's gone."

Galette was arrested in January after an alleged domestic dispute. Charges were dropped, but the episode remains under review by the NFL, which is also reviewing a video that shows a man resembling Galette in a fight on a beach.

"I did not like the video at all, and as a matter of fact, when I saw the video, it was scary. That's why I wanted to meet with him face-to-face," McCloughan said. "That's why I had to sit down with him and ask him what happened. I got the real story, and I'm fine with that."

McCloughan would not explain what he meant by "the real story."

He said the Redskins spoke to more than 20 people around the league, including players, about Galette, beginning their inquiry as soon as word emerged that New Orleans was prepared to let the player go.

"I did too much research, to tell you the truth," McCloughan said with a chuckle. "I got tired of it."

McCloughan said team president Bruce Allen and coach Jay Gruden were involved in the decision to offer Galette a contract, but the GM noted: "When it's all said and done, it's on my shoulders. I felt really, really strong about it."

The Redskins also contacted the NFL about its investigation of Galette, and McCloughan said he knows "there's still a chance" the league will suspend the player.

"But we were definitely more willing to take a chance with that," McCloughan said, "knowing that he's going to be a Redskin and knowing he's going to give us a lot of games."

A day before signing Galette, McCloughan, Allen and Gruden met with the player.

"I can tell you, when he left my room, the guy was crying, the guy was sweating," said McCloughan, who more than once during his 15-minute session with reporters pleaded to be asked a "football question."

"We've all made mistakes or something. I don't want the repeat offenders. I don't want the guy that I know is not going to be a good guy and be in our locker room. I think we have a very good defensive staff," McCloughan said, pounding his right fist on his left palm. "We have a very good defensive meeting room, where you can bring a guy in and say, 'We understand you did this and this. OK. Boom. You do it again, you're going to be gone.'"