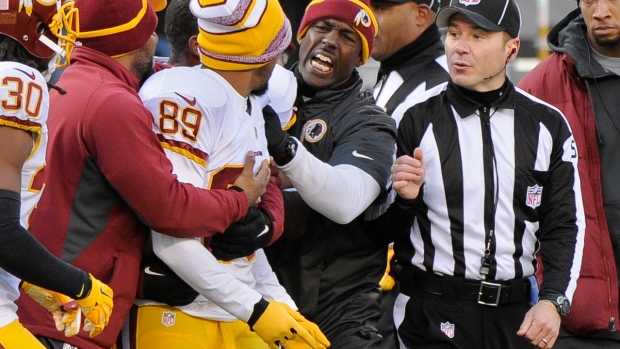 Moss was ejected from Sunday's game against the New York Giants for arguing a questionable call on the final play of the first half that cost the Redskins a touchdown and control of a game they eventually lost 24-13.

Moss seemed to nudge a member of Jeff Triplette's crew after the referee ruled that Robert Griffin III lost possession of the ball diving into the corner of the end zone on a scramble from the 8-yard line. That would have given the Redskins a 17-7 halftime lead.

The play — like all scores — was reviewed and Triplette said Griffin fumbled out of the end zone during his dive and the play was a touchback. The Redskins screamed at the officials after the call. Washington led 10-7 at the half.

"I let my emotions get the best of me, you know," said Moss, now in his 14th NFL season. "I've been around this league for a long time, I know better. I know what I can and what I cannot do — when you're in the situation that we've been in, week in and week out, every play."

The initial replay seemed to show that Griffin, who replaced Colt McCoy late in the first quarter, had outraced Jason Pierre-Paul to the pylon and scored.

NFL officiating chief Dean Blandino tweeted: "In #WASvsNYG RG3 clearly lost control of the ball before GL. It's a fumble. To regain possession he has to hold onto it when he lands."

"It's a touchdown," Griffin said, who played well in relief. "That's how we all felt, everybody in the locker room, coaches included. My understanding is, if the ball passes the plane and you have control of the ball, it's a touchdown in every game that I've ever seen. They decided that it wasn't today."

Triplette clearly explained the ruling to the fans in announcing that the touchdown had been overturned and the half was over. He added there was no time left in the half and the ball rolling out of the end zone made the play a touchback.

Triplette said Moss was ejected for his language and for pointing at an official. He was assessed two 15-yard penalties. The first for his actions toward the referee and the second for his action toward field judge Alex Kemp.

"The first one was directed at me with the language and the point. Probably everybody saw that," Triplette said. " Then the second one, when he got them away, it was a second group of inappropriate language, derogatory, directed at the official specifically."

Moss said he did not see the touchdown, which happened on the Redskins' sideline.

"You can't see it, you're on the field, you just see a touchdown and I was excited, man, and when I saw the call overturned— it only happens to us," he said. "It feels like every time we do something good, something bad comes out of it, and it's only been happening to us. It's been 10 years of this, so I just got carried away and I let that get the best of me and I know better and I have to do better."