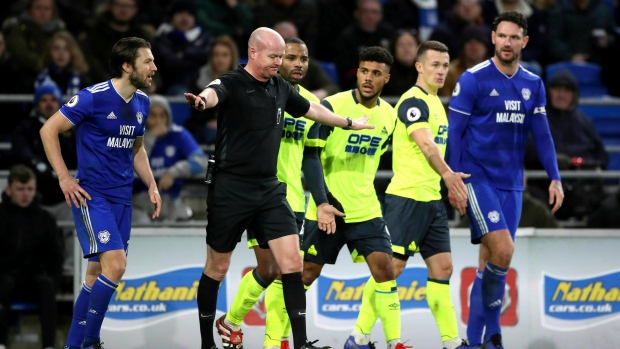 CARDIFF, Wales — Huddersfield was left counting the cost of referee Lee Mason's change of mind in a 0-0 draw against fellow relegation struggler Cardiff in the English Premier League on Saturday.

What had been a dreary match produced a 76th-minute talking point when Mason pointed to the penalty spot after Florent Hadergjonaj tumbled in the box.

Several Cardiff players rushed toward Mason's assistant in the corner and the referee soon made his way there for a conversation.

Mason then dramatically reversed his decision and penalized Hadergjonaj for fouling Joe Bennett rather than the other way round, much to the bemusement of Huddersfield manager David Wagner on the touchline.

Cardiff remains in a healthier position to survive dropping into the second tier, with an eight-point advantage over Huddersfield.