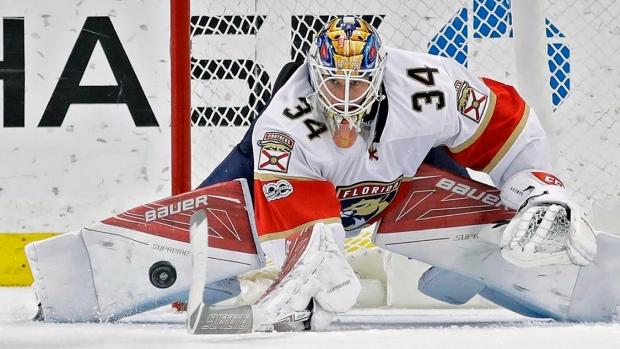 As the sometimes No. 1 goaltender of the Toronto Maple Leafs for six seasons, James Reimer's first 188 NHL starts were picked apart in intricate detail.

Relative obscurity has greeted the 28-year-old in Florida this season where he's quietly thrived (until recently) as the sometimes No. 1 of the Florida Panthers. Reimer's performance no longer draws much praise or scrutiny though, but rather a comfortable quiet in a sunnier, less consequential hockey market.

"I think you probably spend less time trying to shut out the noise probably would be the best way to describe it," Reimer said of his new life in Florida during a recent interview with The Canadian Press. "Playing in a small market you just have to worry less about some of the different stories that may be swirling around because there's just less of them."

Noise was constant around Reimer in Toronto, sometimes for better but often for worse.

He was at once the best hope in the club's crease since Ed Belfour or the inconsistent, oft-injured goaltender who couldn't handle a starting load for disappointing teams.

Management of various stripes saw him as the latter, finally dealing him to San Jose at the trade deadline last season. The club then sent two draft picks to Anaheim for Frederik Andersen, who was a touch younger with mildly better career numbers. He was quickly signed for five years and US$25 million.

Less than two weeks later, Florida committed five years itself and $17 million to Reimer, demonstrating instant belief in the former fourth-round pick that was only fleeting with the Leafs. He'll have the long-term job security with the Panthers as tandem-mate and future hall of famer Roberto Luongo tip-toes closer to retirement, due to turn 38 in April.

Reimer says job security was "probably a little bit up in the air" in Toronto, where he found himself in a constant chase to demonstrate his viability as a No. 1. He posted average numbers on poor defensive teams — his .914 save percentage as a Leaf tied for 22nd among goaltenders with at least 200 appearances.

"Maybe it just falls on my shoulders of not being consistent enough or who knows why that sense was always there," Reimer said.

He added of Florida: "It's nice to have that support behind you and (know) you can go out there and try and do your thing."

Drafted by the Leafs in 2006, Reimer got a brief taste of what change was like when he joined the Sharks in Feb. 2016, but coming aboard with the Panthers was something else entirely. This was putting down roots almost 4,000 kilometres from his hometown of Morweena, Man., while playing under the weight of the biggest contract of his life — Reimer's largest contract previously was worth a total of $5.4 million over three years.

"It's kind of funny," he said. "You sign a longer deal and you kind of get that job security so that's kind of a weight off your shoulders per se. But at the same time with that comes the added pressure of having to maybe subconsciously try and live up to a certain contract. And at the end of the day you can't really worry about it."

It took time for Reimer to adjust to his new life in Florida. He and his wife April were struck at first by the uncomfortable heat upon arrival last September and they had trouble finding a house initially. Reimer had to get himself accustomed to Florida traffic patterns and discover a new route to the rink, adjust pre-game rituals at BB&T Center and figure out how to play with a new team — his third in less than a year following the brief experience in San Jose, which ended at the Stanley Cup final.

Reimer describes life in Florida as somewhere between small-town Manitoba and the hustle and bustle of Toronto. He's even adjusting to all that sunshine, the humidity easing in the winter months following that uncomfortable arrival.

Reimer has been among the more effective goaltenders in hockey over the past few months, trailing only Vezina trophy candidates Braden Holtby and Sergei Bobrovsky with a .937 even-strength save percentage since Dec. 1 (min. 20 starts). He's grabbed more and more starts away from (a recently injured) Luongo as a result, though he's struggled of late for the sliding Panthers after storming through February with a .929 save percentage.

His .917 overall save percentage is tied for 12th among regular starting netminders this season — equal, notably, to Andersen of the Leafs.

"I tried to just keep digging in, keep grinding," Reimer said. "It's probably what everyone would say, but just kept believing in the process and what I was doing would eventually breed success."