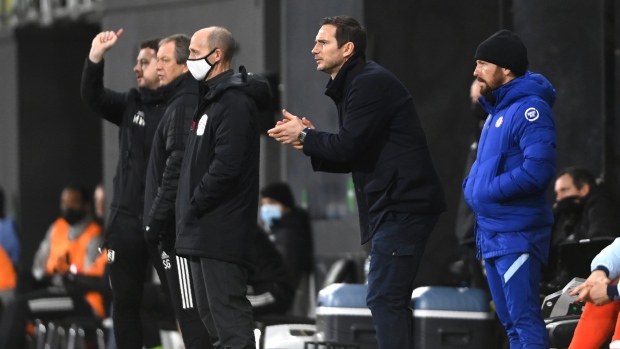 LONDON — Chelsea finally capitalized on the first-half sending-off of U.S. international Antonee Robinson by scoring in the 78th minute to see off stubborn Fulham 1-0 in the English Premier League on Saturday.

Mason Mount drilled home the winner from a central position inside the area after Fulham goalkeeper Alphonse Areola could only scoop away a cross from the left by Ben Chilwell.

Chelsea manager Frank Lampard, who has been under pressure after a run of poor results, punched the air in joy and likely relief, with his team having toiled in attempting to break down a home side which played with 10 men for the entire second half.

Robinson was shown a straight red card in the 44th for a late and heavy challenge on Cesar Azpilicueta that sent the Chelsea right back high into the air.

Third-from-last Fulham drew its previous five games in the league after shoring up its defence following a slow start to the season, and dealt relatively comfortably with Chelsea’s attacks before the goal.

It was a badly needed win for Lampard, whose team had lost four of its last six games to drop to ninth place in the standings — a disappointing position considering Chelsea spent nearly $300 million on new players ahead of this season in its biggest summer spree.

Two of its major off-season signings, Timo Werner and Kai Havertz, started on the bench at Craven Cottage and Havertz never made it onto the field. Werner, his fellow Germany international, came on only in the 74th but made little impact and missed a one-on-one chance in stoppage time on the break.

Werner might have expected to start after ending a 12-match scoring drought last weekend in the FA Cup.