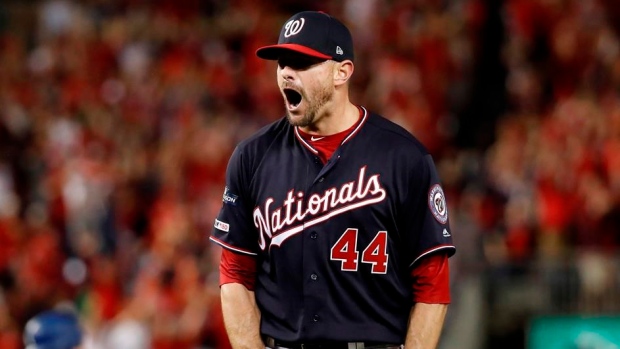 The Dodgers announced the deal Tuesday night for Hudson, who pitched in 40 games for Los Angeles in 2018.

While he was with the Washington Nationals in 2019, Hudson got the final out of two NL Division Series games against the Dodgers and earned the victory in a third while they eliminated LA from the playoffs. Hudson eventually got the final out of the Nats' World Series triumph over Houston.

The 34-year-old veteran started last season with Washington before going to San Diego in a trade on July 30. He went a combined 5-3 with a 3.31 ERA and 75 strikeouts in 54 appearances.

Hudson has spent parts of 12 seasons in the majors with seven teams, including the Dodgers. He spent parts of seven seasons with the Arizona Diamondbacks, starting 33 games with 16 victories in 2011 before undergoing Tommy John surgery and transitioning to a bullpen career in the ensuing years.

The Dodgers created a roster spot earlier in the day when they didn't tender a contract to left-hander Adrian Vasquez.

Los Angeles has added Hudson and Andrew Heaney to a team that won 106 games before losing to Atlanta in the NLCS. But the Dodgers lost 2020 World Series MVP shortstop Corey Seager to a $325 million deal with Texas, and their late-season rental of Max Scherzer ended with the ace agreeing to a megadeal with the New York Mets, pending a physical.