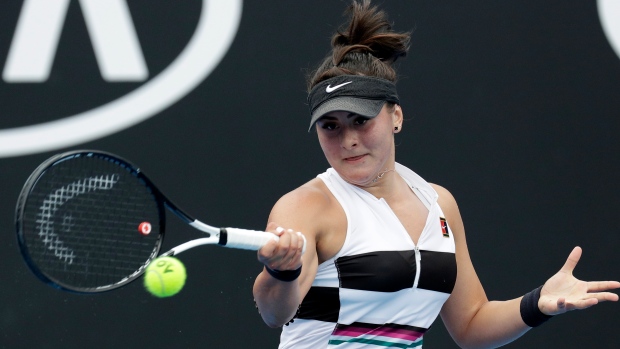 Before she took down one of the greatest of all time in Serena Williams at the 2019 US OPEN, Mississauga, Ont. native Bianca Andreescu was a 60th-ranked tennis player on the verge of making a stunning championship run in the California desert. TSN re-lives Andreescu’s incredible performance at the 2019 BNP PARIBAS OPEN in Indian Wells, beginning today (Wednesday, Mar. 18) at 7 p.m. ET on TSN1 and TSN5 with her Round of 16 matchup.

Round of 16 match vs. World No. 18 Wang Qiang
Wednesday, March 18 at 7 p.m. ET
Unseeded and granted a wild card entry to begin the tournament, Andreescu entered the BNP PARIBAS OPEN ranked 60th in the WTA after starting the year at 152nd, a 92-spot jump for the 18-year-old. With her early success in the tournament, tennis fans began to take notice that the young Canadian was about to make the leap.

Quarter-final vs. World No. 20 Garbine Muguruza
Thursday, March 19 at 7 p.m. ET
The teenaged sensation kept rolling in with a straight sets quarter-final victory over a two-time Grand Slam champion. After releasing some aggression with a mid-match racquet slam, Andreescu continued her dominance, solidified herself as “the real deal”, and sparked the hashtag #BiancaRising.

Semi-Final vs. World No. 6 Elina Svitolina
Saturday, March 21 at 7 p.m. ET
Showcasing every weapon in her arsenal, Andreescu outhit and outwit her opponent, paving her way to the final. She showed no signs of wilting when the big moments came her way, and rose to the challenge with a thrilling upset victory over the tournament’s sixth seed.

Final vs. World No. 8 Angelique Kerber
Sunday, March 22 at 7 p.m. ET
After defeating Svitolina, Andreescu became the first 18-year-old to make the Indian Wells final, and the youngest to do so since 17-year-old Serena Williams did it in 1999. Her next opponent, former world No. 1 player Angelique Kerber, would prove no easy task. Andreescu’s victory not only provided her with some new hardware, but the distinction of being the first Canadian to win a WTA Premier tournament and the first wild card player ever to win Indian Wells.