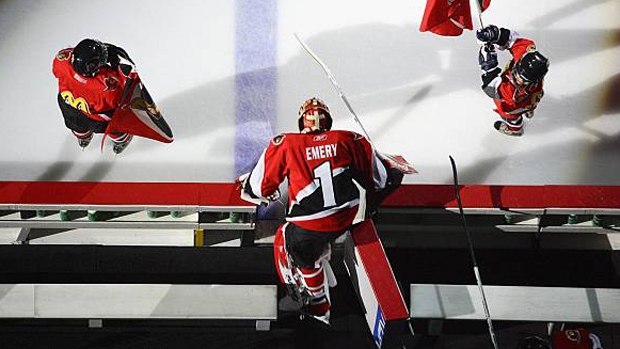 On the night of May 22, 2007, Anaheim defeated the Detroit Red Wings in Game 6 of the Western Conference final, to propel the Ducks to the Stanley Cup Final against the Ottawa Senators.

While most members of the Senators spent that night inside their Ottawa homes – resting from a hard-fought series win over Buffalo and scouting their next opponent for the Cup Final – their No. 1 netminder was off doing something completely different.

Ray Emery was at a lavish mansion south of the city in Greely, Ont., where he was helping lay down vocals for an updated track by local rap artist Belly. Emery had initially agreed to be filmed for a television feature while at this venue, but had a change of heart because of the optics.

There were scantily clad women all over the property, open liquor bottles everywhere and not a single television tuned into the Western Conference final.

Emery may have been a goaltender on the precipice of playing for the Stanley Cup Final, but you never would have known it from his surroundings. He marched to the beat of his own drum and rarely fit inside the tight personality box that is often crafted for NHL players.

In so many ways, Emery’s brash and confident personality was in direct contrast with the stable and predictable government town in which he played hockey.

And it’s what made Emery the most fascinating character in Ottawa Senators history; the goalie who finally took the Senators to the Stanley Cup Final, but who never really seemed to fit in.

A few weeks prior to that night in May, Emery was in hot water with his teammates.

The club was holding a 3-1 series lead against the New Jersey Devils, but now they were holding up an entire airplane for their starting goalie.

The plane sat on the tarmac in Ottawa for almost an hour past its 3 p.m. scheduled departure time, as club officials were unable to reach Emery. In his mad dash to the airport, Emery’s white Hummer – which became the most infamous vehicle ever driven by a Senators player – was involved in a traffic accident on the Queensway. According to police, Emery’s reckless driving caused a three-car accident on the highway.

In the end, the Senators chose to fly to Newark without Emery – forcing their No. 1 goaltender to take a commercial flight on his own later that evening. Emery joined the team at their hotel around 9 p.m. that night, but head coach Bryan Murray had a difficult decision to make: Should he discipline Emery for missing the team flight?

The conundrum for Murray was that the Senators were on such a roll in the playoffs, having won seven of their first nine games. If he chose to bench Emery for the missed flight and start an ice-cold Martin Gerber in Game 5, it could alter the chemistry of the Senators streak.

So Murray opted not to discipline Emery – at least publicly anyway – and the netminder responded by stopping 27 shots in a series-clinching 3-2 victory.

During that magic carpet ride in 2007, Emery’s shortcomings were tolerated and swept under the rug because the team was winning. He could cruise around town in his white Hummer or Lamborghini or roll into the arena on his snowmobile and nobody would blink. His game-day suits became a talking point when he would arrive at the arena, with television cameras making sure to capture his walk to the dressing room.

Yes, even missing a team charter in the middle of the playoffs was deemed acceptable. Emery had the entire city of Ottawa in the palm of his hand in 2007 and seemed to relish the spotlight that came with the territory.

Emery was once quoted as saying, “If you have a little controversy, it adds to the game. The bottom line is it’s entertainment. Even if there are some guys you don’t like – like Terrell Owens – it’s interesting to see the reaction people have to him, even if they are complaining about him.”

And the following season, Emery would put those words to the test.

Despite the red flags that were present, the Senators inked Emery to a three-year contract worth $9.5 million in the summer of 2007. From that point forward, the team and the goaltender were never really on the same page.

Emery didn’t start the 2007-08 season with the Senators because he was recovering from surgery to repair damage done to his wrist during the lengthy playoff run the previous spring. When he returned to the team in November, he was upset that he wasn’t automatically handed back the keys to the No. 1 starting job.

Even though Martin Gerber had guided the club to a 13-1-0 record – one of the best starts in NHL history – Emery felt as though the Swiss goaltender was merely a placeholder for him. After one practice in which he learned that Gerber was starting in favour of him, Emery smashed his goalie stick and tossed it into the empty stands.

And so a great goalie controversy was brewing in Ottawa between Emery and Gerber. It seemed as though new head coach John Paddock was willing to place most of his faith in Emery as the calendar flipped to 2008 – opting to start him for a crucial regular season matchup against Dominik Hasek and the Detroit Red Wings in early January. Emery responded by outdueling Hasek in a Senators victory on Jan. 12th – but that would be his final moment of glory with the Senators.

In that six-week window around the Detroit victory, Emery’s game – both on and off the ice – took a dramatic turn for the worse.  He lost his next five starts after the watershed victory over Detroit. He fought Brian McGrattan in practice, after the two had a fiery exchange during a drill.

In another incident during that time frame, Emery showed up to the arena at 10:55 a.m. for a scheduled 11 a.m. practice. An unimpressed Paddock told Emery to “beat it” and leave the rink, despite the netminder’s plea that he was simply late because of an illness. That day, the Senators players placed a neck tie over the crossbar at practice to hang in place of where Emery should have been. It was an unforgettable moment and one that was captured by photographers and television cameramen.

The message was clear: The Senators were running thin on patience with Emery.

A couple of weeks later, Emery once again showed up late for a team practice. This time, he tried to blame the logistics of returning from the All-Star break as his excuse.  Emery was re-joining the team from a weekend trip to Las Vegas and didn’t get to the practice rink in Long Island until after the Senators 4pm practice had already started.

At that point, the Senators season was spiralling out of control. After a record-setting start, their season had fallen off a proverbial cliff. And Emery – the most polarizing character inside the dressing room – was the easy fall guy.

By late March, Bryan Murray had fired John Paddock and had made one solemn promise to himself: That Emery would never play another game for the Senators.

Despite being down 2-0 and 3-0 in the series against the Pittsburgh Penguins, Murray refused to try and rekindle the magic from the previous spring by tabbing Emery as his starter. Emery was rendered useless as the club was swept in four straight games by the Penguins in the first round.

In his season-ending press conference in April, Murray was grim and blunt about Emery’s future with the team.

“My plan is to not have him back,” he said flatly.

A few weeks later, the club activated the buyout option on Emery, ending one of the most colourful chapters in franchise history.

The strange thing about Emery is that you would have thought most people in Ottawa wanted to see him struggle after he squandered such a golden opportunity here. But in fact, the opposite was true.

Sure, Emery had his detractors. And a lot of his ex-teammates would be the first to say that he was very immature during his time in Ottawa. But there are many who played with Emery who absolutely loved the unique personality he brought into their dressing room.

The story of Emery eating a cockroach on a dare is still the stuff of legend around here. According to the story, there was a dead cockroach on the dressing room floor one day and someone challenged McGrattan to eat it. At first the Senators tough guy agreed, but he got squeamish and backed out.

Emery, however, thought this was such a routine exercise that he simply picked up the cockroach and ate it in front of everybody in the room. And he collected the $500 that was supposed to go to McGrattan for the dare.

His teammates from the 2006-07 season will still talk in awe of Emery’s willingness to fight Buffalo Sabres enforcer Andrew Peters in February of that year, producing one of the most memorable moments in franchise history. The image of a gleeful Emery – smiling as he prepared to fight one of the toughest customers in the NHL – is one that is locked into Senators’ fans minds forever.

Before Emery came round, Senators’ fans were conditioned to think that their goalies were nervous and somehow they shied away from the bright lights and the stage. But Emery seemed to embrace that pressure – even though it was often misguided.

Emery may not have brought stability to the goaltending position in Ottawa, but he brought a flair and confidence that we haven’t seen before and may never see again.

He had a meteoric rise and an equally dramatic fall in this city – a career arc that no other athlete can boast.

Sadly, Emery’s time in Ottawa was a metaphor for his entire life: brilliant, electrifying, controversial – and altogether too short.