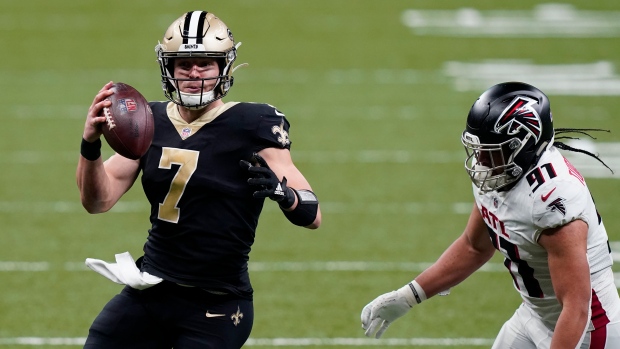 The New Orleans Saints are likely to be without both backup quarterback Taysom Hill and backup running back Latavius Murray, per NFL Network's Ian Rapoport and Jane Slater.

The #Saints are not likely to have QB Taysom Hill (knee) or RB Latavius Murray (quadricep) vs the #Bucs, per me and @SlaterNFL. Both practiced only on Friday and were listed as questionable.

Hill appeared in all 16 games with eight starts while Drew Brees was injured in the regular season this year, as well as the Saints Wild Card Round win over the Chicago Bears. He threw for 928 yards, four touchdowns, and two interceptions in the regular season, adding another 457 yards and eight touchdowns on the ground. The fourth-year backup had four carries for 15 yards against the Bears last week.

Murray played in 15 games with seven starts for an injured Alvin Kamara this regular season, and also appeared in the Saints' playoff opener against the Bears. The 30-year-old finished with 656 rushing yards and four touchdowns in the regular season and scored a receiving touchdown against Chicago in the Wild Card Round.