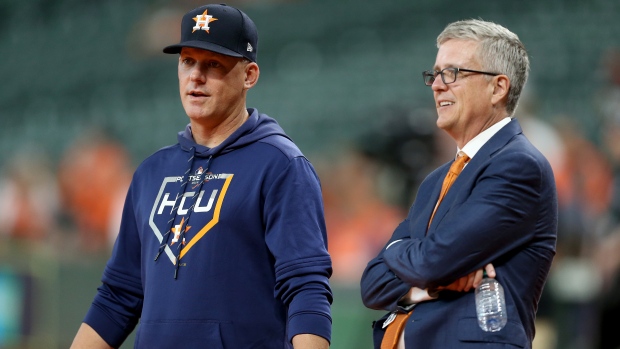 It appears the fate of 2020 MLB season will not impact the suspension length of the suspensions for former Houston Astros manager A.J. Hinch and general manager Jeff Luhnow.

According to ESPN's Buster Olney, both Hinch and Luhnow will be eligible to return to Major League Baseball in 2021 regardless of whether there is a 2020 season.

Hinch and Luhnow were given the one-year bans in January for their roles in the Astros’ sign-stealing scandal during the 2017 and 2018 seasons. Both were fired by the team after the suspensions were announced.

MLB commissioner Rob Manfred wrote in his decision both punishments end "following the completion of the 2020 World Series." Olney reports that because the suspensions are tied to the end of the 2020 postseason rather than a specific number of games, Luhnow and Hinch will be seen by the league as having served their suspensions this year, regardless of a season.

Along with the punishments for Hinch and Luhnow, the Astros also lost their first- and second-round draft picks in 2020 and 2021 and were fined $5 million. Manfred decided against stripping the team of their 2017 World Series title.