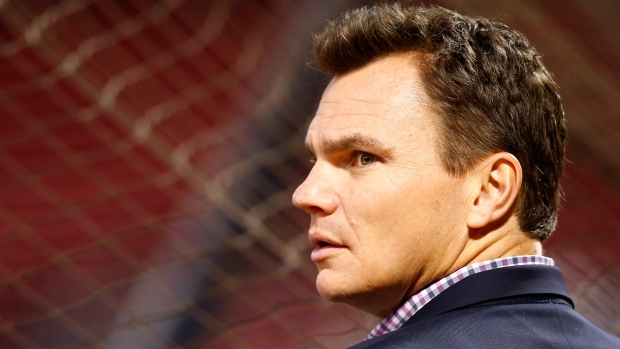 PITTSBURGH — The Pirates have agreed to hire Ben Cherington as their general manager, a person familiar with the decision told The Associated Press.

The person spoke to the AP on condition of anonymity Friday because the agreement had not been announced.

Pittsburgh scheduled a news conference on Monday to introduce its new GM without revealing the person’s identity. Cherington will replace Neal Huntington, who was hired in September 2007 and fired in October.

Now 45, Cherington took over from Theo Epstein as GM of the Boston Red Sox in October 2011. Cherington helped the Red Sox win the 2013 Series but left in August 2015 when Boston hired Dave Dombrowski as president of baseball operations. Boston finished last in the AL East in three of Cherington’s four seasons as GM.

Cherington has been Toronto’s vice-president of baseball operations under GM Ross Atkins since September 2016.

Among Cherington’s first tasks will be to hire a manager to replace Clint Hurdle, who was fired on the morning of the final regular-season game in September. Hurdle went 735-720 in Pittsburgh, the fourth-winningest manager in the club's 132-year history in the National League, but the Pirates finished 69-93, including 25-48 after the All-Star break.

Frank Coonelly, the team president who hired Huntington, left on Oct. 23 in what was described by the club as a mutual agreement. Travis Williams replaced Coonelly and fired Huntington on Oct. 28.

In a change announced Friday, the Pirates fired Kyle Stark, who had been assistant general manager for eight seasons after four years as director of player development.

Pittsburgh earned an NL wild card berth in 2013, reaching the post-season for the first time since 1992 and ending a streak of 20 consecutive losing seasons, and beat Cincinnati before losing to St. Louis in a five-game NL Division Series. The Pirates lost in the wild card game in both 2014 and 2015, then slipped to consecutive losing records before going 82-79 in 2018.

"This is not going to be where we flip the switch and the next day, all of a sudden, we're in the World Series," Williams said when Huntington was fired. "We're going to have to get a GM in place, put a plan in place that charts a path forward within the framework that we're operating that we can get back to being a very successful team."

A graduate of Amherst, Cherington started with the Red Sox as an area scout in 1999 and moved up the organization under Theo Epstein.