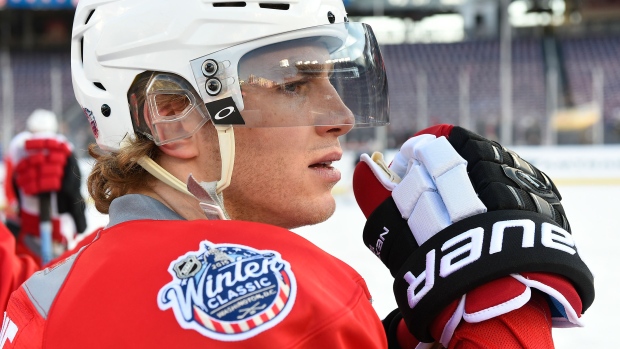 Chicago Blackhawks forward Patrick Kane is reportedly the subject of a sexual assault investigation near his hometown of Buffalo.

The Buffalo News reports that police in Hamburg, New York are investigating an incident that occurred over the last weekend allegedly involving the 26-year-old.

According to the report, officers in Hamburg have been forbidden to speak about the investigation. "We can neither confirm nor deny the existence or nonexistence of a criminal investigation until such a time as a person is charged with a crime," Gregory G. Wickett, the chief of police, told The Buffalo News.

Neighbours of Kane told the Chicago Tribune that police arrived at his lakefront property Sunday night and that several plainclothes officers entered his house using flashlights. At least one wore gloves and was seen taking pictures out front.

The National Hockey League said it was aware of the reports. "We are aware of the police investigation and are following developments," the NHL's Frank Brown, group vice-president of communications, told The Buffalo News.

The Blackhawks also addressed the news. "We are aware of the matter and are in the process of gathering information," the team said in a statement. "It would be inappropriate to comment further at this time."

Kane's agent, Pat Brisson of Creative Artists Agency (CAA), issued a statement Thursday afternoon. "As the Blackhawks indicated in their statement, they are gathering information and will be reviewing reports," it said. "It would not be appropriate to provide further comment at this time."

Kane is scheduled to have his day with the Stanley Cup on Saturday in Buffalo.

The four-time all-star was arrested in 2009 in connection with an incident involving a Buffalo taxi driver. Kane and his cousin pleaded guilty to a disorderly conduct charge, a non-criminal violation.

In an interview with The Associated Press before last year's Sochi Games, Kane said there were things he now knew that he didn't a few years earlier.

"How to work harder in the summer or take better care of yourself as far as eating and different things like that," Kane said. "Picking the right times to have fun with the guys and to make sure that when you're doing it, you're doing it right, and you're careful about the way you're going about it."

Kane, a three-time Stanley Cup winner, signed an eight-year, $84-million contract last summer that goes into effect during the 2015-16 season.