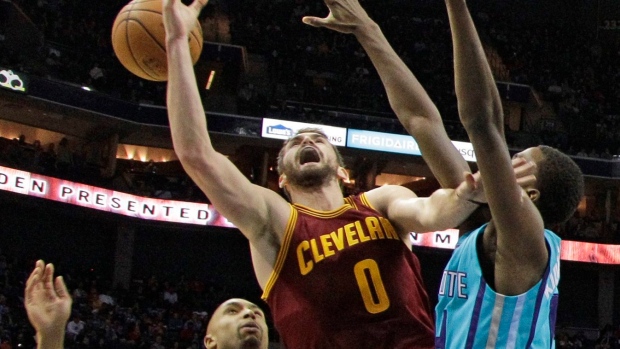 CLEVELAND - Kevin Love is about to find out how much the league values him, and how much the Cavaliers want him.

The power forward opted out of the final year of his contract and will be a free agent on July 1, a person familiar with the decision told the Associated Press. Love, who had a deal worth $16.7 million next season, informed the Cavs on Wednesday, said the person who spoke on condition because the team is not commenting on its free agency plans.

Last week, general manager David Griffin said he expected Love and superstar LeBron James to opt out of their deals and become free agents. Griffin also expects them to re-sign with the Cavs, who made it to the NBA Finals this season before losing to Golden State.

The 26-year-old Love, who came to Cleveland last summer in a blockbuster trade from Minnesota, has said he wants to return to the Cavs. Cleveland played without Love for most of the playoffs after he suffered a left shoulder injury in the first round against Boston. Love underwent surgery after the shoulder was yanked from its socket by Celtics centre Kelly Olynyk.

Love will likely draw major interest in the free agent market, and the Los Angeles Lakers and New York Knicks could be potential landing spots for the three-time All-Star. He must now decide if he'd rather go elsewhere and put up big numbers or stay in Cleveland to chase an NBA title with James and All-Star guard Kyrie Irving.

The Cavs have discussed offering Love a maximum deal, but it's not clear if that's what Love and his representatives are seeking. He may prefer to sign another one-year deal and then become a free agent again next summer to take advantage of the expected jump in the salary cap because of the league's new TV deal, which will kick in before the 2016-17 season.

Love's injury could also factor into his decision-making. Following the surgery, the Cavs said it could take as many as six months for him to recover, which would take Love into the start of training camp. He has been rehabbing for weeks and said earlier this month that he was on schedule with his recovery.

While Love didn't always seem comfortable in Cleveland, and his role changed during his first season with the Cavs, he still averaged 16.4 points and 9.7 rebounds in 75 starts.

He and James were teammates on the 2012 Olympic team, but didn't appear totally connected throughout a tumultuous 2015 season. Still, they formed a bond on the floor and the Cavs were playing their best ball of the season when Love was hurt.

On Tuesday, James posted a message on his Facebook account saying he was "still in a funk" following the finals loss. While he's likely to opt out of the second year of his two-year, $42 million deal, he indicated he remains committed to bringing Cleveland its first pro sports championship since 1964.

"Being back home and back with my fans is everything that I dreamed of," he wrote. "Thank you for an incredible season. I'm not satisfied . I'm not happy with the way things turned out."