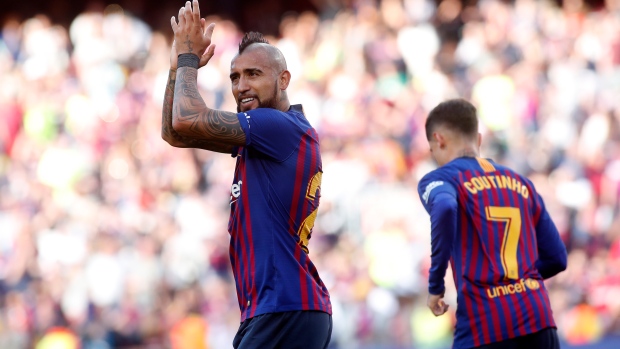 Arturo Vidal is returning to Serie A.

The BBC reports the 33-year-old Chile midfielder is undergoing a medical ahead of joining Inter from Barcelona.

Vidal previously spent four seasons at Juventus from 2011 to 2015 under manager Antonio Conte with whom he will reunite at the San Siro. With the Bianconeri, Vidal won four straight Scudetti and the 2015 Coppa Italia.

A native of Santiago, Vidal spent the last two seasons at Camp Nou. He made 33 league appearances a year ago, scoring eight times. His Barcelona team won the 2019 La Liga title.

Vidal also spent two stints in the Germany, first with Bayer Leverkusen from 2007 to 2011 and then with Bayern Munich from 2015 to 2018, with whom he won the Bundesliga title on three occasions.

Internationally, Vidal has been capped 115 by Chile and was a member of their back-to-back Copa America-winning sides in 2015 and 2016.