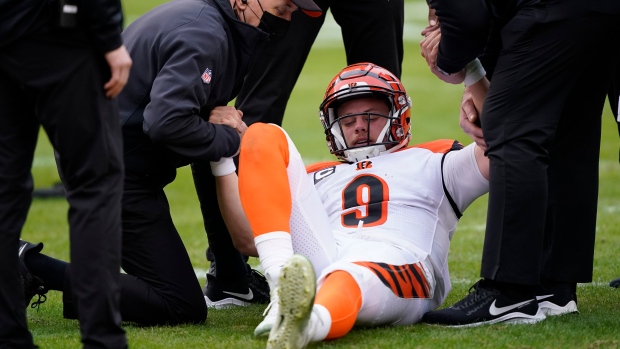 An MRI on Cincinnati Bengals quarterback Joe Burrow's knee revealed more damage than anticipated, per ESPN's Adam Schefter. Burrow tore his ACL and MCL and suffered other structural issues in his knee as well, per Schefter's report.

MRI revealed more damage than anticipated: Bengals’ QB Joe Burrow tore his ACL, MCL, and suffered other structural issues in his knee as well, per @Ben_Baby and me.

With Burrow out, the chances of the Bengals (2-7-1) winning another game this season get slimmer. No disrespect to backup Ryan Finley, but Burrow was the key to the moribund team's improvement this year and its future.

“It’s not fun," Taylor said. "He was making improvements every week, and we were getting the offence headed in a direction that we thought was exciting.”

Keeping Burrow upright and healthy had been a challenge this season with multiple injuries to offensive linemen. But the quarterback mitigated the deficiencies in pass protection by getting the ball out more quickly and extending plays with his legs. He put up some fine numbers and was being talked about as a candidate for Offensive Rookie of the Year.

He completed 65.3 per cent of his passes for 2,688 yards and 13 touchdowns, while running for three more.

Burrow was through 10 games “everything we’d hoped he would be,” Taylor said. “And we’ll get him back at some point. We don’t know when that is, but for now we got to transform that energy and put it somewhere else in this team.”

Burrow's favourite receiver, Tyler Boyd, is trying to keep his focus on the team's longer-term future.

“It just sucks, man," Boyd said. "But he’s a true leader that I know is going to get us to a Super Bowl.”

The offence was noticeably better behind the dynamic, creative Burrow, but the whole scheme will have to change without him. Boyd had another solid game, with nine receptions for 85 yards. DEs Carl Lawson and Khalid Kareem got sacks Sunday, which was significant because pressure from the pass rush had been lacking.

With Joe Mixon on injured reserve with a foot injury, Cincinnati's ground game can't get any traction.

Finley, by virtue of now being Cincinnati's starting quarterback, moves into the spotlight. Selected by the Bengals in the fourth round of the 2019 draft out of North Carolina State, Finley started three games last season after Andy Dalton was benched, but had no stats this season. After Burrow's injury, he was 3 for 10 for 30 yards and threw an interception. Whether anyone will be paying attention to Finley and Bengals the rest of the season is another matter.

The Bengals' psyche. The loss of the franchise quarterback who gave his teammates and fans hope for better days is a huge blow. With six games to go, it would be easy for the players to lose focus with little else to play for the rest of the season.

There were no other significant injuries reported.

Cincinnati needs to regroup and get Finley up to speed before hosting the New York Giants (3-7) on Sunday.