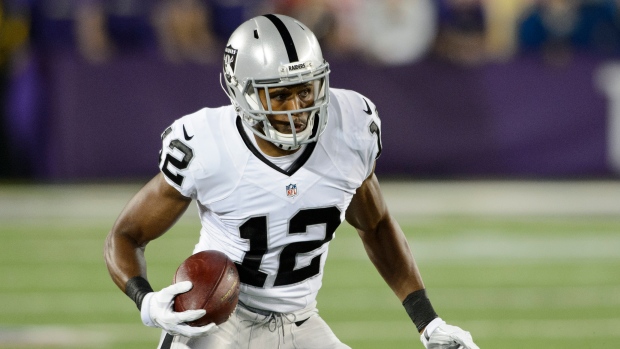 IRVING, Texas - The Cowboys have made their first move to try to fill in for Dez Bryant while the All-Pro receiver is sidelined with a broken right foot.

Dallas acquired receiver Brice Butler from Oakland on Tuesday for a conditional fifth-round pick in next year's draft, a person with knowledge of the deal told The Associated Press. The person spoke on condition of anonymity because the deal hasn't been announced.

Bryant, who led the NFL with 16 touchdown receptions last year, is expected to miss at least a month, and owner Jerry Jones said Tuesday on his radio show that the bone could take six weeks to heal fully. Bryant had surgery Monday night.

"We've had players with foot injuries that did not wait until the six weeks period of time before they were functional and before they were able to play," Jones said. "The repair went well, so Dez is of course Superman when it comes to being physical. But on the other hand, we want it to repair well."

Bryant missed the off-season in a contract stalemate, and then missed all the preseason games with a hamstring injury after signing a five-year, $70 million contract. He was injured early in the fourth quarter of a 27-26 win over the New York Giants in the opener.

Butler was inactive for the Raiders' season-opening 33-13 loss to Cincinnati. A seventh-round pick in 2013, Butler had 30 catches for 383 yards and two touchdowns in two seasons with Oakland.

It's the second trade by the Cowboys in as many weeks for depth at a skill position. They got running back Christine Michael from Seattle a week before the opener, and he was inactive against the Giants. The scenario is likely to be similar with Butler.

"We do believe we have a player friendly system where players can learn quickly," Garrett said a day before the trade. "That's a big part of the NFL these days is you want to be able to have a guy, a young player, maybe a guy you drafted, maybe a guy you signed as a college free agent or a veteran player you're bringing in who has no history with you, you want them to be able to come in and learn and learn quickly."

Terrance Williams, in his third season, will be the No. 1 receiver while Bryant is out. Cole Beasley and Devin Street are likely to get more chances, along with undrafted rookie free agent Lucky Whitehead, who is also an option on kick returns.