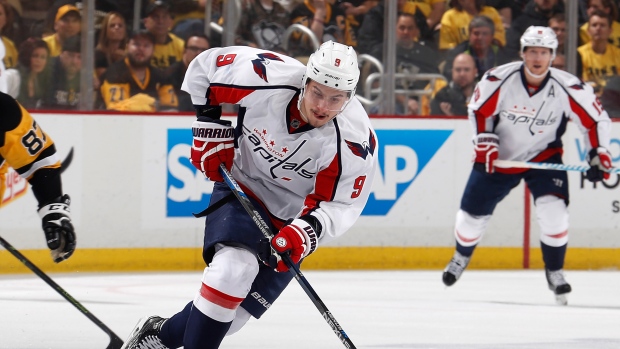 According to a report Sport-Express' Igor Eronko, CSKA Moscow of the KHL has opened contract talks with Washington Capitals defenceman Dmitry Orlov.

CSKA is in talks with Dmitry Orlov #Caps

Orlov, 25, is slated to become a restricted free agent on July 1. He posted six goals and 33 points in 82 games with the Capitals this season and added three assists in the team's 13 playoff games.

He ranked fifth on the team in ice time during the regular season with 19:32 a game and moved up to third in the postseason with 21:25 per game.

Orlov won a bronze medal at this month's world hockey championship, scoring one goal in five games with Russia after the Capitals were eliminated from the postseason.

He spent three seasons playing in the KHL with his hometown Novokuznetsk Metallurg before joining the AHL's Hershey Bears in 2011. He made his debut for the Capitals the next season and has appeared in all 82 games in each of the past two seasons. He owns 20 goals and 93 points in 283 games with the Capitals.

Eronko reports CSKA is also in talks to bring back forward Roman Lyubimov after he spent one season with the Philadelphia Flyers.

Lyubimov dressed in 47 games for the Flyers this season, scoring four goals and adding two assists.

Finally, Eronko reports CSKA general manager Sergei Fedorov said the team is in contract talks with a player currently in the Stanley Cup Final (either on the Nashville Predators or Pittsburgh Penguins).