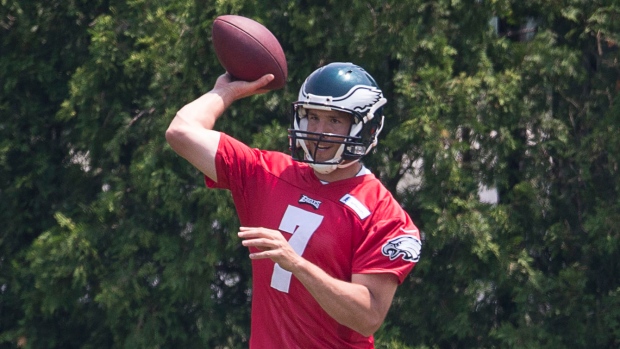 Entering the final year of his rookie deal, Sam Bradford is reportedly set to play out his contract in his first season with the Philadelphia Eagles.

According to Ian Rapoport of NFL Network, Bradford will not negotiate a new contract until after the 2015 season is complete.

The quarterback was acquired by the Eagles from the Rams earlier this year in exchange for Eagles starter Nick Foles.

Bradford is betting himself to bounce back after tearing his ACL in each of the past two seasons. Overall, he missed 31 career games over four seasons with the Rams. Due to the knee injuries, he played in seven games in 2013 and missed every game in 2014.

Bradford jumped out to a strong start in 2012, throwing for 1,687 yards with 14 touchdowns and four interceptions for a career-high quarterback rating of 90.9 before tearing his ACL in Week 7.

If healthy, Bradford will compete with Mark Sanchez for the starting quarterback job. Bradford was heavily limited in OTAs to do his surgically repaired knee, while Sanchez took part in full.

The Eagles report for training camp on August 2.