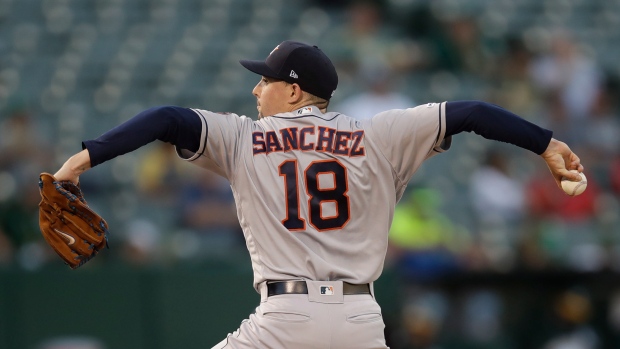 Aaron Sanchez has been non-tendered by the Houston Astros ahead of Monday's 8pm et deadline, reports MLB.com's Mark Feinsand.

Source: The Astros are non-tendering RHP Aaron Sanchez. Not a surprise given that a shoulder injury is expected to prevent him from being ready for the start of the 2020 season.

Sanchez is likely due for a raise on the $3.9 million he made last season where he posted an ERA of 5.89. The 27-year-old is expected to miss the start of the 2020 season while rehabbing from shoulder surgery.

While his numbers were not pretty at the end of the year, Sanchez was noticeably better after the Jays traded him to Houston at the trade deadline.

Sanchez's ERA sat at 6.07 at the time of the trade but improved to 4.82 in four starts with his new team. In fact, Sanchez threw six hitless innings in his first Astros start as the team completed a combined no-hitter that also featured former Blue Jay reliever Joe Biagini who was also included in the deal.

The right-hander spent parts of six seasons with the Blue Jays to begin his major league career after being drafted No. 34 overall in 2010.