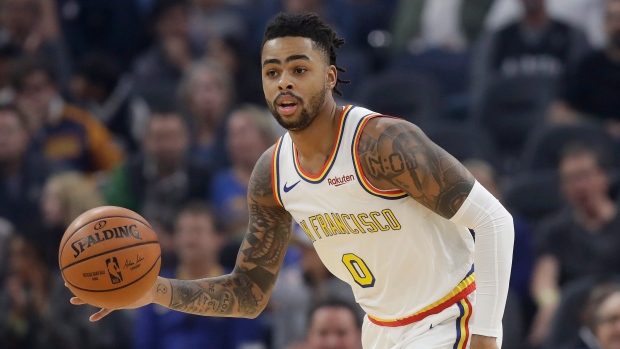 Golden State Warriors' All-Star guard D'Angelo Russell suffered a sprained right thumb in Friday night's 105-100 loss to the Boston Celtics and will be reevaluated in two weeks, according to a report by ESPN's Adrian Wojnarowski.

The 23-year-old sharpshooter left the match during a third quarter stoppage and did not return to action. An MRI confirmed the injury following the game.

Another Golden State All-Star is out: Warriors guard D'Angelo Russell will be re-evaluated with a sprained right thumb in two weeks.

Russell is averaging 24.3 points, 3.6 rebounds, and 6.7 assister per game through 10 appearances since arriving in Golden State this season. It's another name added to a long list of injuries to key contributors for the perennial powerhouse Warriors, headlined by Stephen Curry, Klay Thompson, and now Russell.