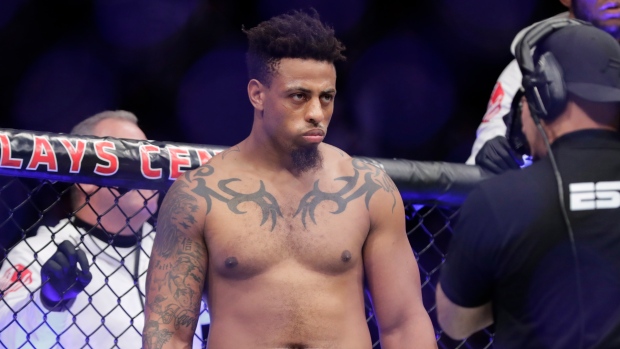 Greg Hardy will make a quick turnaround from his no-contest bout this past weekend in Boston to step in against Alexander Volkov in Moscow on November 9, according to a report by Brett Okamoto of ESPN.

Breaking: “When is Greg Hardy going to take a step up in competition?” The answer is Nov. 9, as he’s agreed to replace Junior dos Santos against Alexander Volkov in Moscow. According to Hardy’s agent Malki Kawa, this was at his request. More soon at @espn. pic.twitter.com/pgb1wUMXL5

Volkov was slated to face Junior dos Santos in the main event of the card that will be held at CSKA Arena, but will slide into the co-main event against Hardy, with the fight between Zabit Magomedsharipov and Calvin Kattar promoted to a three-round headliner.

Alexander Volkov vs. Greg Hardy will be the co-main event in Moscow. Nov. 9 main event is now Zabit Magomedsharipov vs. Calvin Kattar, however due to the short notice, it will remain a three-round fight.

Hardy originally won his bout against Ben Sosoli on October 18 via unanimous decision, but the result was overturned into a no-contest due to the 31-year-old using an inhaler between the second and third rounds.

He was riding a two-fight winning streak after suffering a DQ loss in his UFC debut for an illegal knee while his opponent Allen Crowder was grounded.

Volkov, the No. 7 ranked heavyweight, suffered a third-round KO loss at the hands of Derrick Lewis in his last bout at UFC 229.  Before that setback, the 30-year-old was on a six-fight winning streak which included his first four bouts in the UFC.

Dos Santos was reportedly forced out of the fight with a serious bacterial infection in his leg that sent him to the hospital.