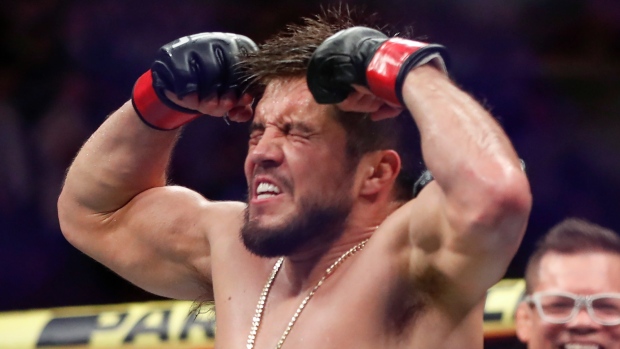 UFC bantamweight champion Henry Cejudo will put his belt on the line against former featherweight champion Jose Aldo at UFC 250 in Sao Paulo, Brazil, according to a report by Brett Okamoto of ESPN.

Cejudo has not competed since his victory over Marlon Moraes where he captured the vacant bantamweight championship last June at UFC 238.  At the time he was also flyweight champion, making him the fourth simultaneous two-weight title holder in the history of the promotion.

Cejudo is on a five-fight winning streak, in addition to his win over Moraes, he also holds victories over Wilson Reis, Sergio Pettis, Demetrious Johnson, where he originally captured the flyweight strap, and T.J. Dillashaw during his current run.

Aldo is considered one of the greatest featherweights in the history of MMA.  He was undefeated in the division from 2006 to 2015 and defended the UFC featherweight belt seven times before dropping it to Conor McGregor at UFC 194.

The 33-year-old has lost his last two fights, including his bantamweight debut against Moraes at UFC 245.  He was also beaten by current featherweight champion Alexander Volkanovski at UFC 237 in his last fight in that weight class.

UFC 250 will take place on May 9 at Ginasio do Ibirapuera in Sao Paulo, Brazil.