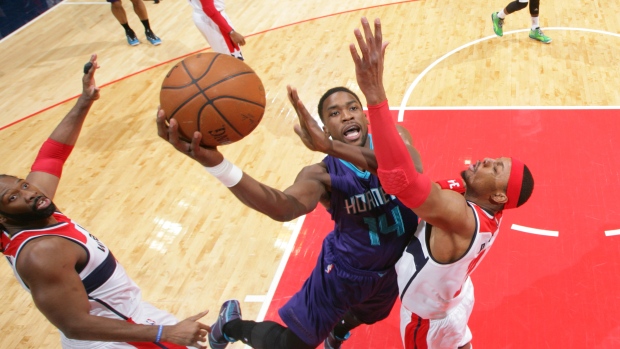 CHARLOTTE, N.C. - Michael Kidd-Gilchrist has agreed to a four-year, $52 million contract extension with the Charlotte Hornets, a person familiar with the situation said Monday.

The person spoke to The Associated Press on condition of anonymity because the move hasn't been announced.

Yahoo Sports was first to report the deal.

The 6-foot-7, 232-pound Kidd-Gilchrist is known primarily for his defence but increased his offensive output last season. He averaged a career-high 10.9 points, 7.6 rebounds and 1.4 assists, although he was limited to 55 games due to injuries. He shot 46.5 per cent from the field.

Kidd-Gilchrist, 21, was the No. 2 overall pick in the 2012 NBA draft, taken one spot behind his former Kentucky teammate Anthony Davis.

Kidd-Gilchrist worked tirelessly last season alongside former NBA All-Star and ex-Hornets assistant coach Mark Price to improve his jump shot with some success. Price has moved on to become the head coach of the Charlotte 49ers, but has praised Kidd-Gilchrist for his willingness to change an awkward-looking shot filled with flawed fundamentals.

"He's totally changed his shooting mechanics really more than any player I've ever seen," Clifford told The Associated Press in April. "It's increased his confidence level. His whole leadership, assertiveness on the court and his understanding of the game has come out more for his teammates as he's gotten more confident."

The Hornets were 27-28 with Kidd-Gilchrist in the lineup last season and 6-21 without him. He had 12 double-doubles last season compared to just one in 2013-14.