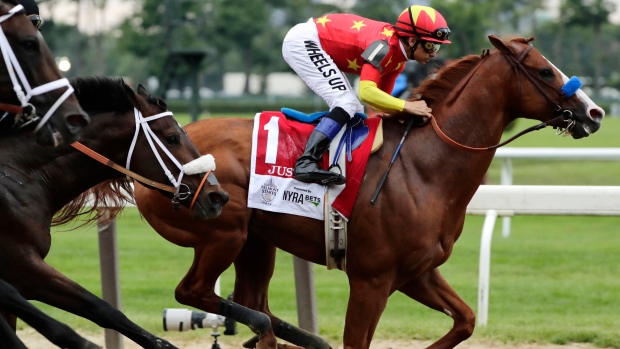 Justify, the 13th horse in the last 100 years to win thoroughbred racing’s Triple Crown, failed a drug test just weeks before the 2018 Kentucky Derby, according to The New York Times.

The report Wednesday said that Justify shouldn’t have been able to participate in any of last year’s Triple Crown events.

Justify tested positive for scopolamine, a banned substance that veterinarians say can enhance performance, especially in the amount that was found in the horse.

In the past, positive tests for scopolamine have resulted in disqualifications, purse reimbursements, fines and suspensions, according to the report.

The test in April 2018 came after his win at the Santa Anita Derby. Justify was undefeated at the time but still needed to finish in the top two to reach the May 5th running of the Kentucky Derby.

The failed drug test would usually trigger a quick process leading to disqualification, but that wasn’t the case this time around. Instead, it reportedly took more than a month to confirm the results of the failed test.

From that point, instead of going public with the information the California Horse Racing Board made a series of decisions behind closed doors as it moved to drop the case and lighten the penalty for any horse found to have the banned substance that Justify tested positive for in its system.

By the time all was said-and-done Justify had won the Triple Crown.

Rick Baedeker, executive director of the California Horse Racing Board, told the Times: “There was no way that we could have come up with an investigative report prior to the Kentucky Derby,” he added. “That’s impossible. Well, that’s not impossible, that would have been careless and reckless for us to tell an investigator what usually takes you two months, you have to get done in five days, eight days. We weren’t going to do that.”

The documents reviewed by the Times showed no evidence of tampering by Justify’s owners.