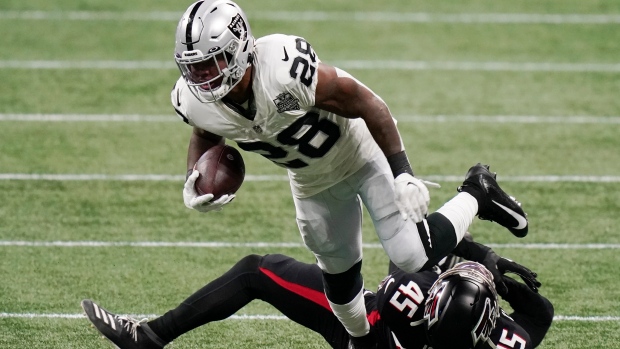 Las Vegas Raiders running back Josh Jacobs suffered an ankle sprain in his team's 43-6 loss to the Atlanta Falcons Sunday, and will undergo tests on the ankle Monday, according to NFL Network's Ian Rapoport.

#Raiders RB Josh Jacobs, whose day was cut short after 10 touches and a fumble, suffered an ankle sprain, source said. He’s having tests this morning, but sounds like it looked worse than it is. Jacobs hasn’t missed a game this season.

Rapoport added 'it sounds like [the injury] looked worse than it is.' Jacobs was injured late in the game Sunday when he was tackled by the ankle after a run.

The 22-year-old has started all 11 games for the Raiders this season, carrying the ball 206 yards for 782 yards and nine touchdowns.