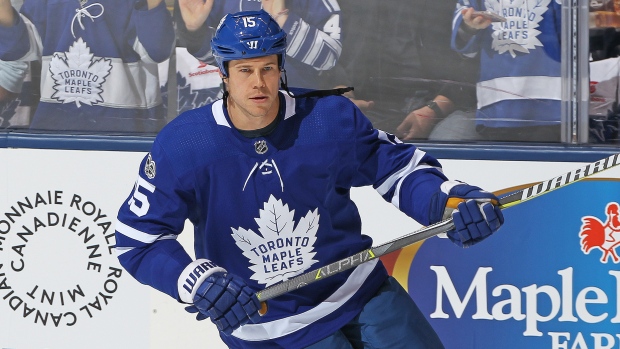 According to Larry Brooks of the New York Post, Toronto Maple Leafs winger Matt Martin is "in demand" on the trade market, despite scoring just three goals last season.

Matt Martin is in demand on trade market. Seriously. Following payment of his $1.5M signing bonus by Leafs (likely yesterday), acquiring club would owe him $750,000 this year and $1.75M next year. Cap hit is $2.5M per.

James Mirtle of The Athletic reported Sunday the Maple Leafs were looking to move Martin's contract and pointed to the New York Rangers as one potential suitor.

Martin appeared in just 50 games last season, entering the Leafs lineup just three times after Jan. 22 as a consistent healthy scratch for head coach Mike Babcock. He scored three goals and posted 12 points in those 50 games, topping 10 minutes of ice time on just five occasions. He did not dress for any of the team's seven postseason contests.

The 29-year-old joined the Maple Leafs on a four-year contract as a free agent in 2016. Then-Leafs general manager Lou Lamoriello said Martin was brought in to "support" the team's young players.

He appeared in all 82 games in his first season with Toronto, posting five goals and nine points.