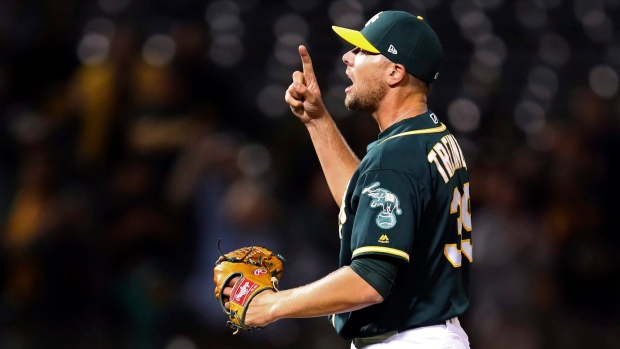 SAN DIEGO — Reliever Blake Treinen reached agreement on a $10 million, one-year contract with the Los Angeles Dodgers just more than a week after Oakland declined to offer him a contract.

A person with direct knowledge of the negotiations confirmed Treinen's deal, speaking to The Associated Press on condition of anonymity Wednesday because it hadn't been formally announced by the seven-time reigning NL West champions.

The right-handed Treinen, a 2018 All-Star, posted a 0.78 ERA in ‘18 but raised it to 4.91 this year. He was replaced by Liam Hendriks in the closer role as the low-budget A’s earned the AL’s top wild card before losing in the wild card game for a second straight year.

Treinen earned himself a nice payday given he was expected to command roughly $7.5 million in arbitration.