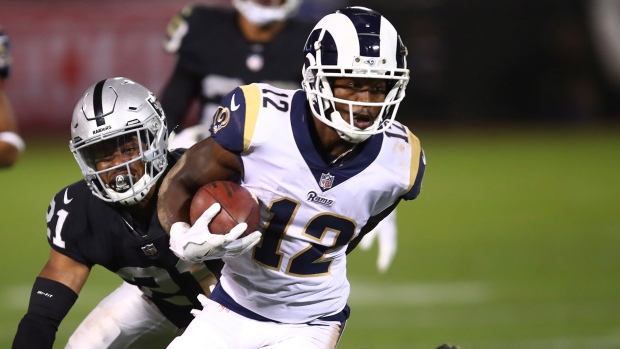 LOS ANGELES — The Los Angeles Rams are trading receiver Brandin Cooks to the Houston Texans, according to a person familiar with the deal.

The person spoke on condition of anonymity Thursday because the teams hadn’t announced the trade. The NFL Network reported the Rams will get a second-round pick while sending a future fourth-rounder to Houston.

Cooks will help the Texans replace DeAndre Hopkins, who was shockingly traded to the Arizona Cardinals last month for running back David Johnson and two draft picks.

Cooks, a California native who spent his first three seasons with the Saints, played the past two years for the Rams after they acquired him from the Patriots. Los Angeles gave him an $81 million contract extension through 2023 before he played a game for the team.

Cooks played in back-to-back Super Bowls, suiting up for New England in early 2018 and for the Rams in early 2019. He caught 80 passes for 1,204 yards and five touchdowns in 2018 with the Rams’ NFC championship team.

But Cooks managed a career-low 42 catches for just 583 yards last season while overcoming the latest in a series of concussions. He had only 15 catches after Week 7, and he sat out for two games after incurring a concussion during the Rams' game against Cincinnati in London.

Cooks has incurred at least five concussions during his NFL career. He didn't play for four weeks after his most recent concussion, seeking additional medical help during that stretch.

Although Houston still has receivers Kenny Stills, Will Fuller and Randall Cobb, the Texans clearly wanted another veteran target for Deshaun Watson after they moved on from Hopkins and his steadily spectacular production. Hopkins, who has five career 1,000-yard seasons, caught roughly one-third of Watson's completions over the past three years.

Cooks joins running back Todd Gurley in the off-season exodus of veteran talent from the Rams. Cooks and Gurley, the former AP Offensive Player of the Year, were vital components of coach Sean McVay’s offence over the past two seasons.

Yet the Rams still have plenty of offensive skill-position talent heading into the draft later this month.

Robert Woods and Cooper Kupp were a potent, productive wideout combination last season while Cooks' availability was limited. Receiver Josh Reynolds seemed capable of a larger role when he stepped up in Cooks' absence, making 15 catches for 224 yards in a five-game stretch.

Los Angeles also needs high draft choices after it traded away its first-round pick in the upcoming draft and next year's draft to acquire cornerback Jalen Ramsey from Jacksonville.