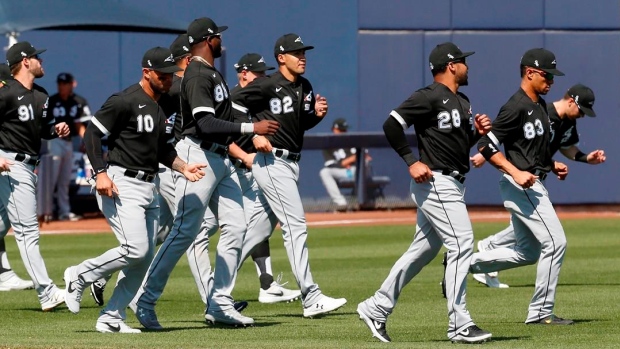 NEW YORK — Players agreed to a deal with Major League Baseball that would preserve service time in the event this season is cancelled because of the coronavirus pandemic, but left open details of what a reconfigured schedule would look like.

As part of the agreement approved by the union Thursday night, players will not challenge the loss of their salaries if no games are played.

Management will advance $170 million in salary payments over the first 60 days of the original schedule, and that money does not have to be returned if the season is cancelled. Player salaries this year are expected to total roughly $4 billion.

Management was given the right to cut the amateur draft in both 2020 and 2021, and to freeze the values of signing bonus money at 2019 levels.

Details were divulged to The Associated Press by people familiar with the agreement who spoke on condition of anonymity because no announcement was made.

Opening day was to have been Thursday, but was pushed back to mid-May at the earliest because of the virus outbreak. The spring training schedule was cut short on March 12 because on the pandemic, and it remains unclear when and if baseball can resume.

“Each of the parties shall work in good faith to as soon as is practicable commence, play, and complete the fullest 2020 championship season and post-season that is economically feasible,” the agreement says. There must be no legal restrictions on mass gathering and travel, and a determination play “does not pose an unreasonable health and safety risk to players, staff or spectators.”

They also agreed to consider playing past the usual end of the post-season in late October and early November, even if it involves using neutral sites and domes. They would consider a large increase in doubleheaders to get as many games in as they can, to play without fans and to revise the post-season format.

Seven-inning games for doubleheaders have not been given much discussion but also have not been ruled out. The sides committed to trying to finish initial discussions by April 10.

Players considered service time the key, and older players were willing to give up money to keep younger colleagues on track for big-money contracts next off-season.

If there are no games this year, anyone currently on a 40-man roster, 60-day injured list or an outright assignment to the minor leagues with a major league contract would receive 2020 service time equaling what the player accrued in 2019. If a partial season is played, service time would be the equivalent of what the player would have received over a full schedule. The formula multiplies days by 186 — the original length of the season — and dividing by the actual length of the season.

Mookie Betts, Trevor Bauer, Marcus Stroman, George Springer and JT Realmuto would be eligible for free agency, even if no games are played. The Los Angeles Dodgers acquired Betts from Boston just before spring training with the assumption they would have the 2018 AL MVP for one season.

But the trade-off was players would give up their salaries if there is no season, other than the $170 million being advanced.

Advances will be determined based on a player's current contract, designed to guarantee money to those at the bottom of the salary scale. Those with so-called split contracts whose salaries while in the minors are from $46,000 and $91,799 get $275 daily. Those at $91,800 to $149,999 receive $500 daily and those at $150,000 or more $1,000 daily. The remainder of the $170 million will be split among the rest of the players with major league contracts who want advances; each player has the right to opt out.

Players on the restricted list, such as New York Yankees pitcher Domingo Germán, are excluded from the advances. Germán must serve the final 63 games of an 81-game suspension without pay for violating MLB' domestic violence policy.

In the event of a shortened season, 2020 salaries would be prorated depending on how much of the season is played.

In addition, signing bonuses may be deferred in both years, with up to $100,000 due within 30 days of each contract's approval and 50% of the remainder on July 1 in each of the following two years. The signing deadline may be no later than Aug. 10 and competitive balance round picks may no longer be traded.

In a late change, signing bonuses for undrafted players subject to the draft will be capped at $20,000 and not $10,000 as MLB proposed earlier.

Management also has the right to push back the start of the signing period for international amateur players from July 2 to the following Jan. 15 for both this year and for 2021. Then end of each signing period could be delayed from June 15 to Dec. 15. Signing bonus pool levels will remain at their 2019-20 levels for 2020-21 and 2021-22.

In the event of a cancelled season, all players who were eligible for salary arbitration last off-season would receive the same salaries in 2021 as they were due in 2020. First-time eligible players next winter would use their 2019 statistics as their platform.

They agreed salary arbitration decisions next off-season could not be used as precedents, and in the event of a shortened season statistical comparisons in arbitration would be adjusted to account for lesser opportunities. In the event of a partial season, qualifying offers to free agents after the season would be based on the full salary total of the top 125 players and not the prorated portion.

If the season is shortened, performance, roster and bonus payments along with the thresholds for reaching them will be reduced by the percentage of the 162-game regular season a player's team actually plays.

While the thresholds for the luxury tax remain unchanged, the amount due by a club would be reduced by the percentage of regular-season games not played by that team.

Signing bonus payments, deferred compensation and termination pay due from April through June may be delayed until Sept. 1. If no games are played, MLB would reimburse the union for up to $2 million in spring training allowances the players' association has given to its members, money that will be paid from international signing bonus pool tax or the industry growth fund.

Trades and signings already have been frozen, and optional assignments to the minor leagues must be made by Saturday.

The union's executive board and other players gathered on a telephone conference call and unanimously approved the agreement Thursday night, and owners assented Friday.