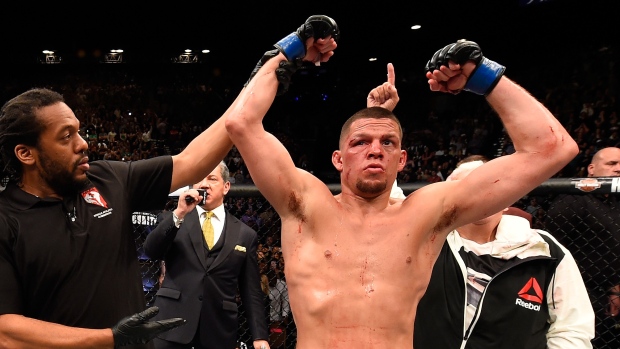 Nate Diaz will return to the Octagon at UFC 262 as he’ll face Leon Edwards in a five-round, co-main event bout on the May 15 card, according to a report by Ariel Helwani of ESPN.

Nathan Diaz vs. Leon Edwards is set for UFC 262 on May 15 in Houston, per sources.

And, in a twist, the fight will be the first five-round non-title co-main event in UFC history.

The bout, which will take place in the welterweight division, will be the first non-title, five-round  co-main event bout in UFC history.

Diaz has not fought since he lost to Jorge Masvidal at UFC 244 in a bout that was for the BMF belt.

The 35-year-old lost the bout due to a doctor’s stoppage after a cut over his eye a deemed to severe to continue after the third round.

Prior to that bout, Diaz defeated Anthony Pettis via unanimous decision at UFC 241.

After missing a year-and-a-half of action, Edwards had his return to the cage cut short earlier this month when an accidental eye poke brought his fight against Belal Muhammad to a premature end.

The fight was ruled a no-contest.

Edwards was originally scheduled to fight Khamzat Chimaev, however he was forced out of the bout as he was still recovering from COVID-19.

Prior to the no contest, the 29-year-old was riding an eight-fight winning streak that stretches back to 2016.