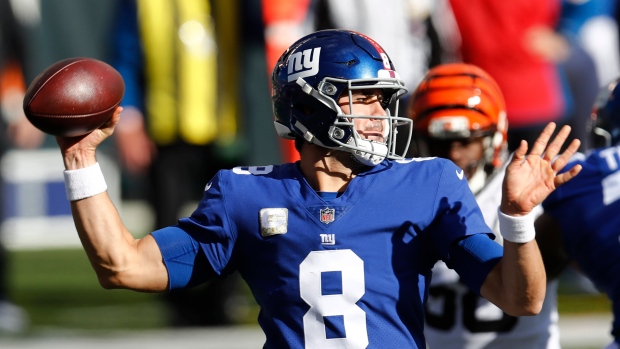 New York Giants quarterback Daniel Jones had an MRI Monday on his injured hamstring and is believed to have avoided major injury, according to NFL Network's Ian Rapoport.

#Giants QB Daniel Jones underwent tests on his hamstring today and sources say he did avoid major injury. He has an outside chance at playing Sunday, though they’ll know more if he’s able to get on the field and test it in a few days. NYG will have plans with Jones & without him.

Rapoport adds there is an outside chance he plays Sunday, though New York will know more in a few days.

Jones injured his hamstring in the second half of the Giants' win over the Cincinnati Bengals Sunday.

The 23-year-old Jones has started 11 games for the Giants in his second season in the league, leading the team to a 4-7 record with 2,335 yards, eight touchdowns, and nine interceptions.