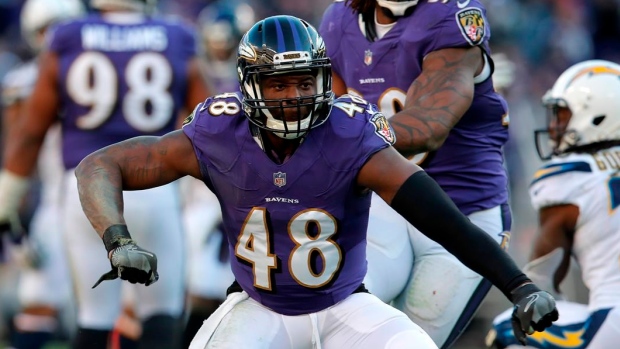 NEW YORK — A person with direct knowledge of the deal says the New York Jets and linebacker Patrick Onwuasor have agreed to terms on a one-year contract.

Onwuasor played his first four NFL seasons in Baltimore and was once considered the heir apparent to C.J. Mosley with the Ravens. Now, the two are teammates again in New York.

The person spoke to The Associated Press on condition of anonymity because teams aren't permitted to announce deals until they're officially signed. NFL Network first reported the Jets and Onwuasor agreeing to terms.

The Jets did announce the official re-signings of both linebacker Neville Hewitt, who agreed to terms last week, and safety Bennett Jackson, who was a free agent after New York didn't tender him an offer.

The 27-year-old Onwuasor joins what has become a suddenly crowded linebacker spot for the Jets. He's primarily an inside linebacker, where Mosley and Avery Williamson are projected as starters. Hewitt, James Burgess, Blake Cashman are also on the roster and all three started at the position last season.

Onwuasor was signed by Baltimore as an undrafted free agent in 2016 out of Portland State. He worked his way into the starting lineup in his second season alongside Mosley and had a breakout year in 2018, when he had a career-high 5 1/2 sacks and an interception.

After Mosley signed with the Jets last winter in free agency, Onwuasor moved into the veteran's spot in the middle as the defensive quarterback. Onwuasor started the first five games, but struggled, got benched and started just one more game.

The Jets and general manager Joe Douglas appear to like his upside as a physical presence in the middle of the defence, as either a backup or potential starter. Mosley is working his way back from a core muscle injury, while Williamson missed all of last season with a torn ACL in his right knee. There's also some uncertain over Williamson's future with the Jets; he is due to count $8.5 million on the salary cap this season.