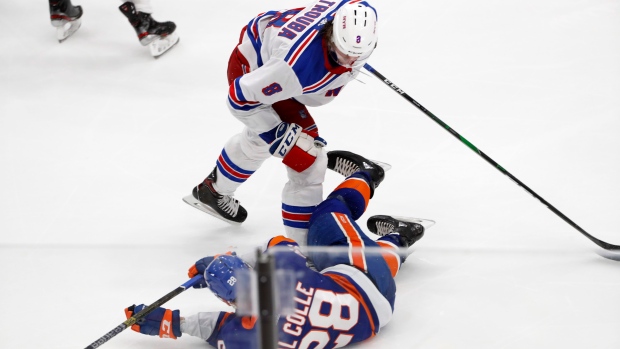 According to Arthur Staple of The Athletic, the NHL deemed the third-period collision a legal, "full body" hit.

From last night: no discipline for Jacob Trouba coming from the league.

As the rules are written now, not all head contact is illegal. If the league AND the players have an appetite to change that, then they will.

For now, this isn’t an illegal hit. https://t.co/D9jKBwJpH3

Trouba landed the big hit on Dal Colle just under six minutes into the final frame, catching the Islanders winger with his head down as he attempted to skate the puck out of the defensive zone. Trouba was not penalized for the hit, though Islanders head coach Barry Trotz said he believed it qualified as a head shot.

"The puck was a little bit in (Dal Colle's) feet, Trouba stepped up... the first contact was at the head... .and he was vulnerable, so that's some of the red flags," Trotz said. "The league looks at everything, my initial look at it, I thought it was a head shot, but I'll let the league look at it.

"Sometimes it's not intentional.... We'll see what the league says."

Jean-Gabriel Pageau, who was making his Islanders debut, dropped the gloves with Trouba after the hit, picking up a two-minute instigator penalty and a 10-minute misconduct in the process. Both players also received five-minute majors for fighting.

“It was my bad pass (that put Dal Colle in a bad spot to be hit),” Pageau said. “The way the guys welcomed me here, if it had been me that got hit I’m sure someone would have stepped up for me. I thought it was a high hit, that’s why I did it.

"I care about the guys here already. I’m lucky to be a part of a group like this.”

Dal Colle did not return to Tuesday's game - a 4-3 overtime win for the Rangers - after the hit. Trotz did not have an update on his status post-game.