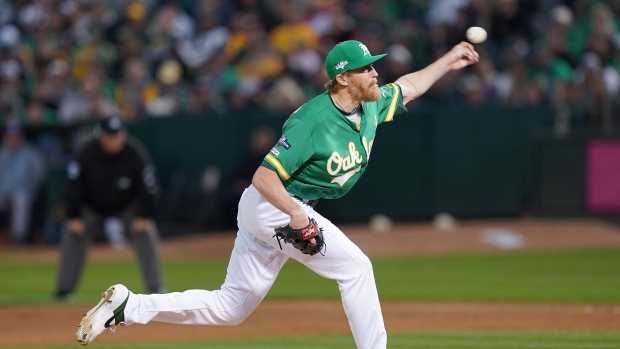 OAKLAND, Calif. — Left-handed reliever Jake Diekman agreed to a $7.5 million, two-year contract to return to the Oakland Athletics on Tuesday after joining the club in a trade from Kansas City before last July’s deadline.

Diekman’s deal includes a team option for the 2022 season. Oakland, which earned the top AL wild card last season before losing at home to Tampa Bay, re-signed Diekman a day after declining to offer a contract to former closer Blake Treinen, letting the 2018 All-Star become a free agent.

After the season ended, manager Bob Melvin and general manager David Forst said the A’s might need to do even more — they won 97 games and still were 10 behind the majors-leading 107-win Houston Astros in the AL West — to guarantee themselves a long playoff series in October. Oakland lost in the wild-card game for the second straight year.

Oakland also announced Tuesday that it reached minor league agreements with right-hander Jordan Weems and outfielder Dillon Thomas. Each will get an invite to spring training.

After the season, Oakland declined its half of a $5.75 million mutual option on the 32-year-old Diekman, who went 1-1 with a 4.43 ERA in 28 outings for the A’s following his July 27 trade after beginning 0-6 with the Royals. Diekman received a $500,000 buyout, then the A’s decided to bring him back on a new contract.

He made a career-high 76 relief appearances and was second in the AL in games pitched.

The A’s on Monday also traded switch-hitting second baseman Jurickson Profar to the San Diego Padres for catcher Austin Allen and a player to be named.