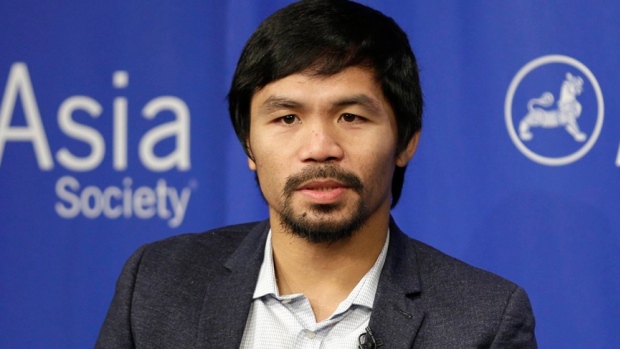 It appears that Manny Pacquiao is coming out of a three-month retirement.

Top Rank fighting promoter Bob Arum told ESPN that Pacquiao plans to fight on either Oct. 29 or Nov. 5 on a pay-per-view card in Las Vegas. His opponent is as yet unnamed.

The return of the eight-time champion comes after a brief retirement that followed his unanimous decision victory against Timothy Bradley Jr. on April 9.

Pacquiao, however, does have prior senate duties in the Phillipines to attend to, so he will have to split his time between the government and boxing training.

"Manny wants to come back. The problem is he can only come back if it doesn't interfere with his senate duties," Arum told ESPN. "We had penciled him in for Oct. 15 at Mandalay Bay but we were informed that is no longer possible because he has to spend that week leading up to Oct. 15 formulating the budget in the senate and doing the votes."

The 37-year-old sat out for nearly a year after his mega-fight with Floyd Mayweather Jr. in May 2015, where he lost a unanimous decision.