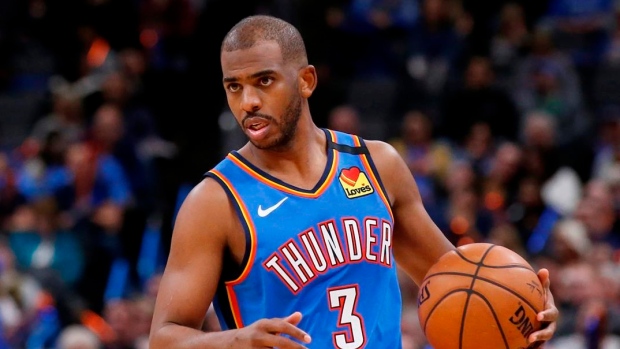 All-Star guard Chris Paul is being traded from the Oklahoma City Thunder to the Phoenix Suns, where he'll play alongside one of the league's most dynamic young scorers in fellow All-Star Devin Booker, a person with knowledge of the situation said Monday.

The Thunder are acquiring Ricky Rubio, Kelly Oubre, Jalen Lecque, Ty Jerome and a first-round pick that will be conveyed sometime between 2022 and 2025, said the person who spoke to The Associated Press on condition of anonymity because the trade had not been finalized by the league.

Rubio reacted to the trade news with a tweet: “... what a business," he wrote.

It is a huge leap for the Suns, who went 8-0 inside the NBA's restart bubble at Walt Disney World in a frantic, but futile, quest to make the playoffs. Paul is owed about $41 million for this season and has a $44 million player option for next season, which was too much of an impediment for other teams that considered acquiring him last summer.

The Suns, however, deemed it worth the risk. They haven't made the playoffs since a run to the Western Conference finals in 2010.

ESPN and The Athletic first reported details of the trade.

Paul was an All-Star for the 10th time this past season, averaging 17.6 points and 6.7 assists. Phoenix becomes his fourth team in less than four years; he was with the Los Angeles Clippers through the 2016-17 season, then spent two years in Houston, then last year with the Thunder after being acquired as part of the trade that sent Russell Westbrook to the Rockets.

Paul is also president of the National Basketball Players Association. The trade reunites him with Suns coach Monty Williams; Paul played for Williams in 2010-11 when Williams was in his first season coaching the New Orleans Hornets.

“Man, I’m 35 years old and I still get a chance to play basketball every day and say that’s my way of life,” Paul said last week, when asked about trade rumours during an appearance in the Time100 speakers' series. “That is crazy in itself so regardless what happens, I’ll be ready.”

Oubre averaged a career-high 18.7 points last season. Rubio is entering his 10th NBA season and has also played for the Timberwolves and Jazz. He signed a 3-year, $51 million deal with the Suns before last season and averaged 13 points and 8.8 assists per game with Phoenix.

Jerome was the 24th overall pick out of Virginia last season and played in 31 games as a rookie while averaging 3.3 points. Lecque played in five games last season.