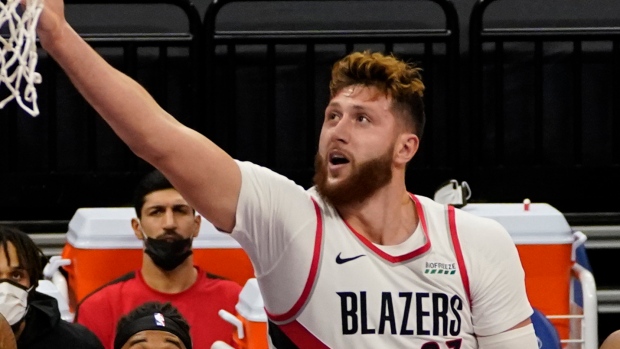 The Portland Trail Blazers now know how long they will be without the services of big man Jusuf Nurkic.

The Athletic's Shams Charania reports that the Bosnian centre will miss the next eight weeks after fracturing his right wrist on Thursday night against the Indiana Pacers.

Nurkic, 25, incurred the third quarter of the 111-87 loss. Underneath the Pacers' basketball, Nurkic could be seen swiping at the ball before falling to the floor under contact.

This is the second significant injury in as many years for the 16th overall pick in 2014. Nurkic missed all but eight games last season with a broken leg.

"He had a long road back from his other injury," Blazers coach Terry Stotts said on Thursday night. "He had a rough start of the season, it looked like he was getting back on track. Obviously, this is a big setback for him and for us."

Heading into Thursday, Nurkic was 9.8 points and 7.7 rebounds through 12 games.

The Blazers are already without centre Zach Collins after undergoing a second ankle surgery in four months in late December.