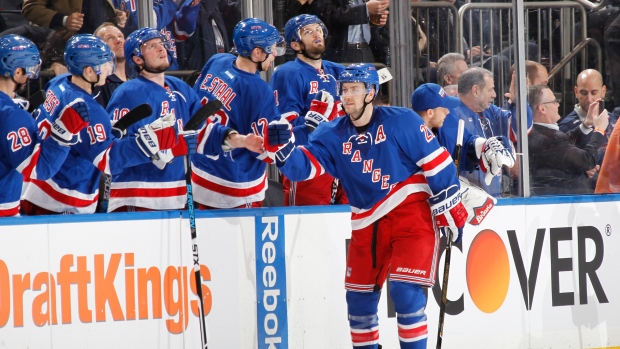 The New York Rangers have set the price for Derek Stepan at a "no doubt first-pair right defenceman," Larry Brooks of the New York Post reports.

Unless NYR get no doubt first-pair right D for Stepan, would not make deal. Already have 2d pair guy in Smith if they will pay market $.

Brooks notes the Rangers feel they already have a second-pairing defenceman in Brendan Smith if they re-sign him before free agency.

TSN Hockey Insider Bob McKenzie reported Wednesday Stepan is available on the trade market before his full no-trade clause picks in on July 1.

Stepan has four years and $26 million left on his contract with annual cap hit of $6.5 million.

The 26-year-old American scored 17 goals and added 38 assists over 81 games with the Rangers in 2016-17, his seventh year with the club. He added two goals and four helpers over 12 playoff games this season.

Selected by the Rangers 51st overall in the 2008 NHL Entry Draft, Stepan has 128 goals and 232 assists over 515 career games with the Blueshirts.