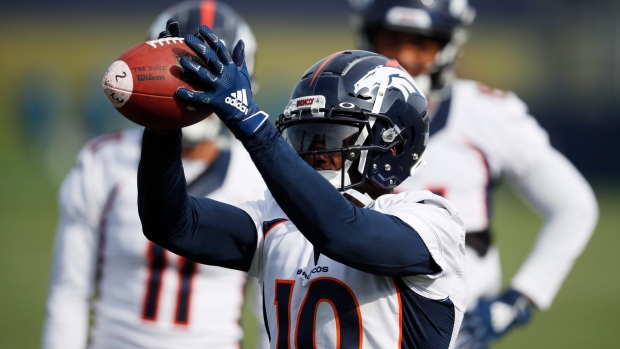 The San Francisco 49ers have acquired wide receiver Emmanuel Sanders and a 2020 fifth-round pick from the Denver Broncos in exchange for a third-round pick and a fourth-round pick in 2020, according to a report by Adam Schefter of ESPN.

Denver is dealing WR Emmanuel Sanders and a 2020 5th-round pick to San Francisco in exchange for 2020 3rd- and 4th-round picks, per league sources.

Sanders appeared in seven games this season for the Broncos and caught 30 passes for 367 yards and two touchdowns.

The 32-year-old was in his sixth season with the Broncos, after spending the first four years of his NFL career with the Pittsburgh Steelers, the team that selected him 82nd overall in the third round of the 2010 NFL Draft.

Sanders is a two-time Pro Bowler and posted the best numbers in his career in 2014, the first year he was selected to the all-star game.  In what was his first season with the Broncos, Sanders appeared in all 16 regular season games and caught 141 passes for 1,404 yards and nine touchdowns, all career highs.

Schefter also reports that the Broncos were hoping to hold on to Sanders for one more week and play him against the Indianapolis Colts, but the 49ers wanted him in the lineup on Sunday against the Carolina Panthers.